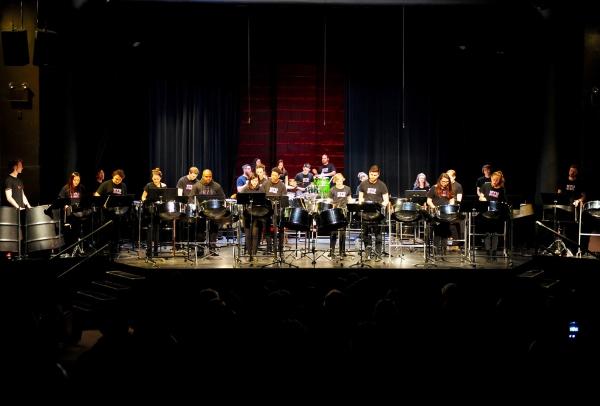 Welcome to the Steinhardt School's Department of Music and Performing Arts Professions at New York University. NYU Steinhardt offers the highest level of professional training in the performing arts within the world’s cultural center, New York City. This is matched by the superb academic resources of a world-class university. Undergraduates receive intensive and systematic training in their specialization with acclaimed faculty along with a broad liberal arts education. Graduate students receive specialized academic training; lessons, performances, and master classes aimed at advancing their artistic goals; and advanced research opportunities in new and sophisticated facilities.

NYU Steinhardt’s Department of Music and Performing Arts Professions was established in 1925. In 1968, the Department merged with the New York College of Music. Since that time, Steinhardt Music and Performing Arts Professions has functioned as NYU's "school" of music and developed into a major research and practice center in music technology, music business, music composition, film scoring, music performance practices, performing arts therapies, and the performing arts-in-education (music, dance, and drama). Today, 1,600 students majoring in these renowned music and performing arts programs are guided by 400 faculty. Our degree programs—baccalaureate through doctorate—are marked by an integration of performance, research, technology, and practice. Further, the programs are integrated with one another in ways that bring performance majors and composers together with choreographers, directors, actors, dancers, educators, librettists, and filmmakers in collaborative projects often reviewed by the New York media. Faculty sit on leading journal editorial boards, perform in the most prestigious concert venues in the world, and publish some of the most significant performing arts research on the scene today. Housed in new and growing facilities including advanced studios in music technology and rehearsal, practice, and concert spaces for our orchestra and performance programs, our Department and the Steinhardt School offer an unparalleled environment for artistic, professional, and scholarly challenge and growth

Our Department provides conservatory-level training in a leading research university located in the heart of New York City. We provide in-depth, specialized training in each of our programs, while providing links between them that lead to new insights, discoveries, and opportunities. We encourage students to take courses and to interact with faculty across traditional programmatic and Steinhardt School lines. In addition to these multiple university synergies, our campus is surrounded by and blends into the world’s capital and center of the performing arts, New York City. This location enables us to draw upon the greatest artists in the world and allows our students to build networks and take advantage of abundant professional opportunities. We broaden music students' education with the option to study abroad at the NYU campus in Prague, which offers a full music curriculum.

Steinhardt Music and Performing Arts faculty come from rich and varied backgrounds in performance, research, therapy, and business. Our faculty are acclaimed and active scholars, performers, directors, and music business entrepreneurs and executives, and their extensive professional connections create abundant networking possibilities for our students. Further, these faculty open up opportunities for our students to complete internships with leading music industry companies in New York City, the world's heartbeat of the performing arts professions. In addition, at any given time, our current students have roles on Broadway and most Broadway musicals cast NYU alumni. Our Jazz Big Band is the only college jazz band to be regularly invited to perform in and "sell out" at the legendary Greenwich Village Blue Note as well as midtown's Birdland, and many of our other student ensembles perform at esteemed jazz venues such as the Village Vanguard.

Thus, at graduation, our students have already trained with the major active artists in the industry who will be selecting casts for Broadway shows, instrumentalists for major orchestras, ensembles and jazz bands, recording engineers, producers, and young executives for record companies, and so on. Every one of our academic programs balance the very best training and study with guidance for professional success after graduation.

Upon conclusion of the program, students will be able to:

A History of Excellence

Music and Performing Arts Professions at NYU Steinhardt was founded as the Department of Music Education in The Steinhardt School in 1925, one of the first of its kind in the Northeast. It was one of the first departments in the United States to award a doctorate in Music Education. Wilfred Bain, one of our early doctoral recipients, went on to be called the "Dean of Deans" in United States schools of music through his decades of serving as Dean during the developing years of Indiana University's School of Music. Throughout the 1930s, 1940s and 1950s, the Department was a leader in vocal and choral performance and acclaimed for solid academic study in Music Theory and Music History.

In 1968, Music and Performing Arts merged with New York College of Music, at that time, the oldest conservatory of music in New York City. Since then, Steinhardt Music and Performing Arts Professions has functioned as NYU's "school" of music and developed into a major research and practice center in music technology, music business, music composition, film scoring, music performance practices, performing arts therapies, and the performing arts-in-education (music, dance, and drama). All undergraduate and graduate degree programs in Music Performance at NYU are located in Steinhardt. Over the years, in addition to degrees in Music Performance, Music Composition and Music Education, the Department expanded its offerings with fully accredited Programs in Music Business, Music Technology, Music Theatre, Educational Theatre, Dance Education, Music Therapy, Drama Therapy, and Performing Arts Administration. It is an extraordinary feat that most of the degree programs just listed are internationally recognized and acclaimed in their area of specialization.

Cy Coleman, multiple Tony and Grammy Award-winning composer of Sweet Charity, On the Twentieth Century, Barnum, and City of Angels as well as super-hit singles such as "Witchcraft" and Betty Comden, multiple Tony and Grammy Award-winning lyricist of On the Town (written with Leonard Bernstein), Bells are Ringing, Applause and On the Twentieth Century (written with fellow alum Cy Coleman), and the Academy Award-winning film, Singing in the Rain are esteemed alumni.  Film composer and Oscar winner Elmer Bernstein (who scored more than one hundred films including Ten Commandments, The Man with the Golden Arm, To Kill a Mockingbird, Walk on the Wild Side, The Great Escape), as well as Oscar-winning film writer (Moonstruck), Tony Award and Pulitzer Prize-winning playwright and director (Doubt) John Patrick Shanley, have brought NYU's Steinhardt School's reputation to Broadway and Hollywood for over fifty years.

Our alumni have moved on to celebrated careers as entertainment industry executives, record producers, entrepreneurs, performers, composers, educators, and arts therapists. Our graduates are professors and administrators in colleges and universities throughout the world. Thousands of NYU Steinhardt Music and Performing Arts alumni in all facets of the arts professions provide unique networking possibilities for each new generation of graduates.