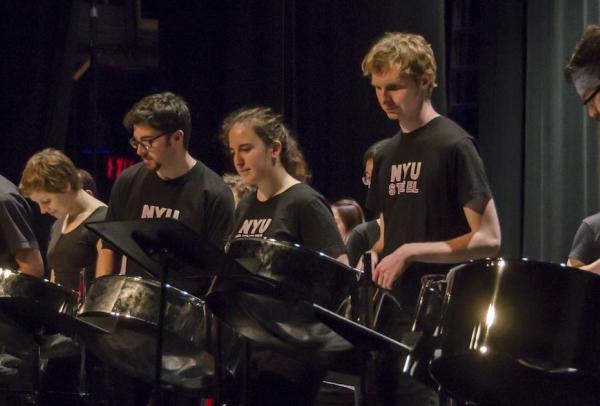 NYU Steel is dedicated to exploring the art of steel pans to the fullest, performing rare compositions and arrangements ranging in scope from Philip Glass and Jason Trueting, to David Rudder and Lord Kitchener from Trinidad and Tobago, where the art form was invented. The ensemble presents several unique performances each year, collaborating with composers globally, while enriching the steel drum repertoire.

As part of a global initiative instituted in collaboration with the university, NYU Steel is constantly pursuing ways to reach audiences in an international scope, driving to cultivate a niche in the world stage. At the same time, NYU Steel continues to nurture relationships with the local community, intent on becoming leaders in education, performance, and creativity.

Whether engaging audiences with upbeat island tunes or dazzling them with the mellifluous sounds of Philip Glass, NYU Steel is becoming one of the premier university steel pan ensembles on the East coast. Enriching both the community and the city, NYU Steel is discovering all the possibilities when you combine glass and steel.

To arrange an audition for NYU Steel, please contact Professor Statser (sjs512@nyu.edu). Auditions will take place during the first week of class each semester.

Composer Philip Glass is considered by many to be one of the most prolific and influential composers of the late 20th century. While his compositional style is generally labeled as “minimalism,” he prefers to speak of himself as a composer of “music with repetitive structures.” Throughout his illustrious career lasting over 25 years, Glass has composed 20 operas, 8 symphonies, concerti for piano, violin, timpani, and saxophone quartet, several film scores, and a large body of solo piano repertoire.

In the mid-90’s, inspired by his widely popular solo piano performances, Glass began work on a set of piano etudes. Over ten years later, new music is still being added to the collection. Glass notes, “Their purpose was two-fold. First, to provide new music for my solo piano concerts and second, for me to expand my piano technique with music that would enhance and challenge my playing. Hence, the name Etudes, or ‘studies’. The result is a body of work that has a broad range of dynamic, tempo and emotion. I hope to complete a second set of ten etudes, of which the first six are already composed, in the next few years." In the fall of 2007, So Percussion member and NYU Steel Drum Ensemble Director Josh Quillen began arranging the first volume of Etudes for steel drum ensemble. The Etudes dense textures lend themselves well to steel drum ensemble, and Quillen’s arrangements provide a unique and innovative approach to the performance of Philip Glass’ music.