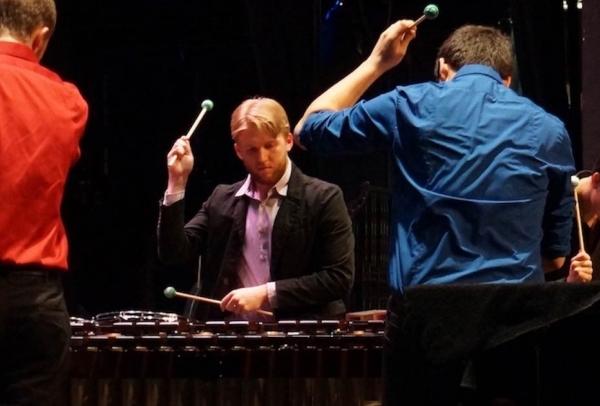 The NYU Percussion Ensemble focuses its' repertoire on the seminal works of the 20/21st centuries. From the powerful works of iconoclast Edgar Varese to his modern day counterpart, Frank Zappa, to the cutting edge compositional styles of (NYU Composition and Music Technology faculty member) Morton Subtonick.

Each year, the NYU Percussion Ensemble presents several unique performances, including CoMotion, a bringing together of percussion and physical theatre. Performances have included Stravinsky's L'Histoire du soldat, in collaboration with the Blessed Unrest Theatre Company, as well as Stockhausen's Teirkreis and Musik im Bauch, with the NYU Steinhardt Program in Dance Education.

Program Notes: Trio Per Uno by Nebojsa Jovan Zivkovic consists of three movements. The edge-movements have some similarities in manner and appear as if they would represent a perfection of wildness in an archaic ritual cult. The second movement has it's own special lyric and contemplative mood. The opening requires a bass drum (lying flat) played with timbale sticks by all three players. In addition to that sound, a pair of bongos and China gongs are used by each player. Trio Per Uno is recorded on Zivkovic's CD "The Castle of the Mad King". (Nebojsa Zivkovic)

Program Notes: In the economy of its instrumentation, Steve Reich's Music for Pieces of Wood recalls the spare performing forces of the composer's Clapping Music. As in the case of Clapping Music, however, Music for Pieces of Wood exploits its modest means to create a rhythmic and metric discourse of surprising complexity. Modeled according to Reich's much-favored phasing technique, a single rhythmic figure is offset and overlapped with itself in a constantly evolving composite texture.

Music for Pieces of Wood calls for five musicians, each playing a pair of claves – essentially, a short, tuned wooden rod struck against another. At first glance, the most complicated parts of the score are the detailed instructions regarding the sanding and boring required for proper tuning of the claves. The music begins simply enough: the first player lays down a featureless, metronomic beat that continues throughout the piece. The second player then joins in with a repeating twelve-note pattern. The other players join in one by one playing the same pattern as the second player, either in unison with him or offset by a few beats. When they enter, however, each does so note-by-note, so that several repetitions are necessary before they are playing the entire pattern. Because each clave is tuned to a specific pitch, an overall melodic and rhythmic texture slowly takes shape until a surprisingly complex web of composite sound emerges. This idea is then reversed as each of the players in turn begins to discreetly omit note after note from his pattern, until nothing but the original metronomic beat remains. This entire build-up/tear-down plan is repeated with shorter and shorter rhythmic patterns, until the process is completely exhausted. (Jeremy Grimshaw)

Ballet Mécanique is not so much a musical work as a phenomenon. The original scheme was that Antheil’s piece should be performed in conjunction with footage the art-film pioneer Dudley Murphy, another American in Paris, put together in collaboration with Fernand Léger. However, the two components were created independently, and the score turned out to be twice as long as the film, which was shown by itself in 1924. There was also the problem of how to synchronize sixteen player pianos. Accordingly, Antheil revised the first half of his score for a more practical setup, with all but one of the player pianos replaced by regular pianists, and this version was performed in Paris in 1926 and at Carnegie Hall the next year. Though Antheil made a third, trimmer version in 1953, there was no further performance until 1989. Since then, the first version has been performed with digital help, and all three have been recorded, as has a realization of the score accompanying the film (on the DVD Bad Boy Made Good).

Antheil idolized Stravinsky, and had reached Paris in time to catch the first performance of Les Noces, as you will hear. In a note he wrote after his ultimate reworking, he spoke of how the music is governed not by harmony, as traditionally in western music, but by the ‘time-space’ principle (that is, by pulse and ostinato), working through the numbers from two to eight and back again. He suggested, too, that his composition expresses “the barbaric and mystic splendor of modern civilization; mathematics of the universe in which the abstraction of ‘the human soul’ lives.” “More locally,” he went on, “the first ‘theme’ may be considered that of mechanical scientific civilization; the second and third barbaric ones.” (Paul Griffiths)