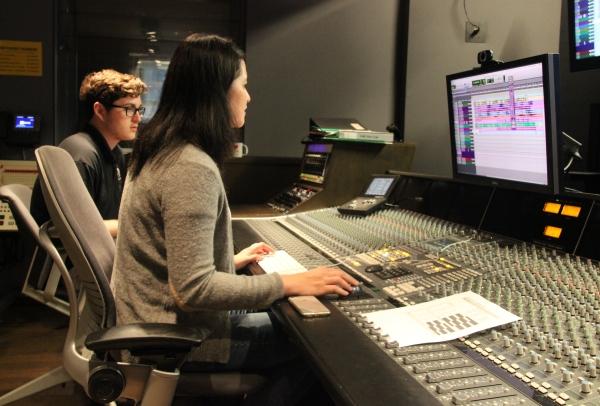 Our Recording Sessions in Action

As an undergraduate or graduate Screen Scoring student, you will participate in many recording sessions that serve as laboratories for current scoring practices. These sessions are designed to incorporate contemporary production methods and to practice modern scoring aesthetics. Our numerous and eclectic recording sessions prepare you for every step of the recording process, and develop our students into the versatile and skillful composers the industry now demands.

You will participate in multiple hybrid recording sessions every year in which you will have the opportunity to write for top industry soloists who record over the music you create using sample libraries and synthesizers. Learn how to produce their own sessions, work with players, and use best practices while producing top quality professional demos with a combination of live and virtual instruments.

You will record with multiple orchestral ensembles, including the NYU Symphony as the hands-on laboratory for the Advanced Orchestration class.

As a Screen Scoring student, you are eligible to participate in our annual NYU Film Scoring Competition. You may submit a score for one of several animated films created by the NYU Tisch animation class. The winning composers have their pieces performed and recorded by the NYU Symphony Orchestra as part of the orchestra’s concert series.

The NYU Contemporary Music Ensemble comprises Undergraduate and Graduate Instrumental Performance Majors with a passion for new music and multimedia. In collaboration with the NYU Screen Scoring program, these concerts feature newly composed pieces by Screen Scoring students and aim to advance the art of music with visuals.C

The NYU Percussion Ensemble features a wide variety of percussion instruments offering you the opportunity to experiment with infinite combinations to create new compositions to picture.

You will choose clips from silent films and score them for small ensembles to perform live. While ragtime piano often comes to mind when thinking about silent film music, you are given complete freedom of style and the role the music plays in the picture. The silent film need not be from the past, though choosing a historical clip is encouraged.

This concert is organized and presented by the undergraduate Composer’s Collective.

Every semester, this concert showcases the diverse compositional voices within the NYU Steinhardt Composition programs. There are no aesthetic guidelines for this concert, so the program is always diverse. Chamber music, musical theater, solo pieces, film scores, songs, and more are all encouraged.