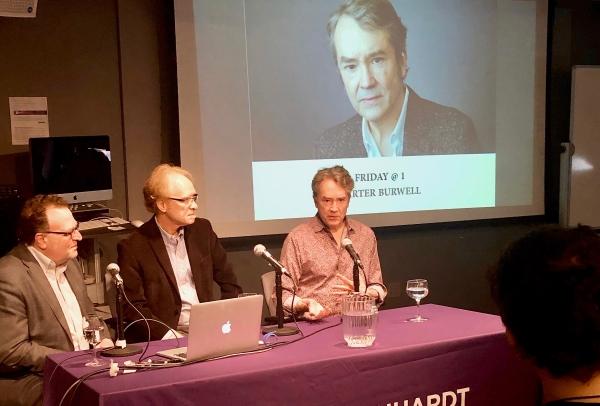 Our Friday@1 series presents conversations with some of the most renowned composers, songwriters, publishers, and industry executives in New York City and beyond. Our distinguished guests discuss their own creative processes, share their accomplishments and experiences, and thoughtfully critique our students’ work in Masterclasses.

Howard Shore (Lord of the Rings, Silence of the Lambs) I Film Composer

Carter Burwell has frequently collaborated with the Coen brothers, having scored 15 of their films. Burwell has also scored three of Todd Haynes' films and all the films of director Martin McDonagh. He has received Oscar nominations for Best Original Score for Haynes' Carol (2015) and McDonagh's Three Billboards Outside Ebbing, Missouri (2017). Other notable film scores include the Spike Jonze films Being John Malkovich (1999), Adaptation (2002), and Where the Wild Things Are (2009), David O. Russell's Three Kings (1999), Lisa Cholodenko's Olive Kitteridge (2014), and Charlie Kaufman's Anomalisa (2015).

Shaiman has a unique place in the film music industry, with a great talent for musicals and songs, getting great reviews with his acclaimed scores for The American President 1995), Patch Adams (1998), Simon Birch (1998) or South Park (1997) (with wonderful songs). Shaiman won Grammy and Emmy Awards and the Tony Award for his musical, Hairspray. He has been nominated for the Oscars and still works in musical stages and cinema scores. Shaiman has also appeared as an actor in some movies, many times playing the piano.

Brooklyn born and bred artist Tamar-kali is a second-generation musician with roots in the coastal Sea Islands of South Carolina. As a composer, Tamar-kali has defied boundaries to craft her own unique alternative sound.

She scored her first feature film, Mudbound, directed by Dee Rees, for which she won the World Soundtrack Award in the Discovery of the Year category. The film marks her third collaboration with the director after appearing in Pariah and writing a song for Bessie. She has since scored other feature films including Come Sunday and The Lie directed by Veena Sud.

Tamar-kali was also recently featured in the New York Times article about female film composers coming up in the industry.

Blake Neely is one of the most prolific and sought-after American composers, arrangers, orchestrators, and conductors in the film and TV industry today. Neely has contributed to and been credited on dozens of films (Pirates of the Caribbean films, King Kong, The Last Samurai) and TV projects over the years. He has composed the music for over twenty television series, including Riverdale, Arrow, The Mentalist, Legends of Tomorrow, The Flash, and the new Kevin (Probably) Saves the World, and has been nominated for three Emmy awards, and has won both ASCAP and BMI awards for The Mentalist, Brothers & Sisters, Golden Boy, and Arrow.