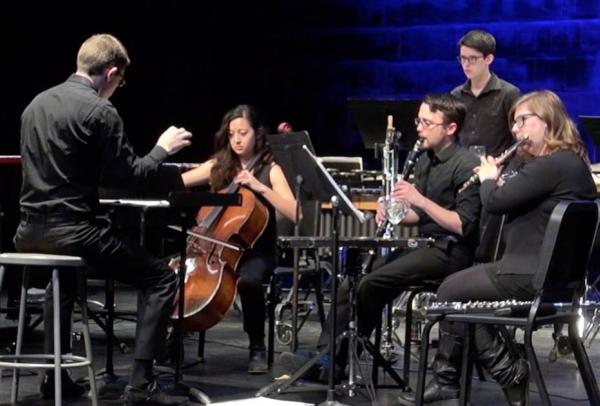 The NYU Contemporary Music Ensemble was formed in 2011. It is dedicated to performing new and relevant works by contemporary composers, including Iannis Xenakis, Pierre Boulez, Jacob Druckman, Philip Glass, and Julia Wolfe, as well as up-and-coming composers such as Andy Akiho and Timothy Andres. To date, the NYUCME has premiered nearly 50 new works by NYU graduate students of the NYU Program in Music Composition. The ensemble maintains the highest standards of excellence and sustains a rigorous rehearsal and performance schedule.

Students are selected based on audition for participation in the ensemble.

Plektó is one of Xenakis’ lesser-known works, composed in the later part of his career. The piece was premiered in 1994 at the Wittener Tage für Neue Kammermusik, by the Ensemble Köln. The title stems from the Greek verb “plek,” which means, “to weave.” Throughout the work, a variety of contrapuntal shapes and textures are woven together, although unlike many of Xenakis’ works where these lines contribute to an overall mass of sound, he seems to have placed much more emphasis on the individual in Plektó. In addition, the work features a multi-metric section in which each of the six performers are playing at different tempi, similar to one of Xenakis’ earlier pieces, Persephassa.

Miss Donnithorne's Maggot was conceived at the party following the first performance in 1969 of Eight Songs for a Mad King. Randolph Stow, who wrote the text for the very serious and tragic Eight Songs said, “Let's write a funny one, as a sequel.” Miss Donnithorne was born five years later, and her music is more introvert, more contemplative, and, I would think, ultimately more disturbing than that written for George III, the Mad King, certainly only “funny” in a most qualified manner. The music refers constantly to the Victorian salon music with which one must assume Miss Donnithorne was familiar. After the Prelude, her song Green Mooned the White Lady is even strophic, in the manner of a Victorian ballad.

The next song starts with a quotation from Shakespeare's Hamlet, “They say the owl was a baker's daughter,” and the ensemble evokes an empty house full of clocks, at first ticking, and eventually chiming and jangling through the protagonist's disturbed, distorted memories of her tragic wedding day. The Harbour Lay on Her Indigo Back is based on a dump, an Elizabethan dance form, but the surface is close to a Victorian quadrille. The purely instrumental Nocturne that follows is a dreamy distant cousin of Gustav Lange's Blumenlied, a very popular display piece for aspiring late nineteenth-century lady pianists. In Her Rant (On the Doorsills of My Cake) Miss Donnithorne hears sailors drill-marching: her betrothed was a sailor, the music is essentially military - except for her vulgar excursions into Jenny Lind-like operatic recitative. In the following recitative, In the Dusty Afternoon, the Victorian piano style becomes even more distorted into her over-heated personal memories and fantasies, while the violin accompaniment to her actual words suggests the theatrical traditions of Victorian music hall. (Could such a well-bred Victorian lady ever have visited such a common establishment?) Her final reel (Hark, Hark, His Voice!) refers to both Mendelssohn's and Wagner's Wedding March, and quite literally has the lady reeling drunk on her own dandelion wine, as her fantasies about her betrothed become ever more lurid. In her ramblings she hears a bosun's whistle (is it the wind through the trees?), evoking the presence of the betrothed in the next room. She ecstatically rushes into his imagined arms, to a cheap tune summing up the whole masquerade, and we realize that she is imprisoned absolutely in these imaginings in this music, forever estranged and alone. (Peter Maxwell Davies)

Bash for flute, clarinet, percussion, piano, violin, viola, cello, bass is a joyful party of clashing ideas, Bash is the third piece of a trilogy for quartet, duo and octet of similar instrumentation, in which the musical theme originates in Headspring, wanders around in Wander & Wonder, and clashes with itself in Bash. (Ruben Naeff)

After studying mathematics and music in Amsterdam and working some years as an economist, Ruben Naeff is currently enrolled in a graduate program at New York University, where he studies composition with Michael Gordon. Ruben’s broad interest led to many interdisciplinary pieces like De Bètacanon (about the hard sciences), The Dancing Dollar (about the current financial crisis), and the YouOpera.

Please click through this album to see photos from a concert with Norwegian string ensemble 1B1 at National Sawdust in Brooklyn: 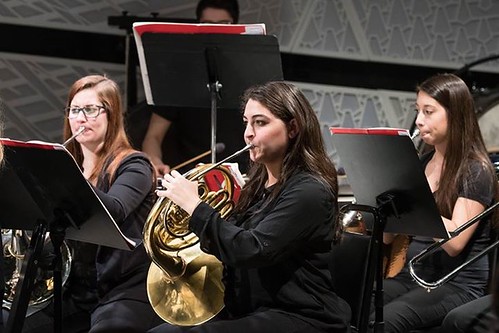