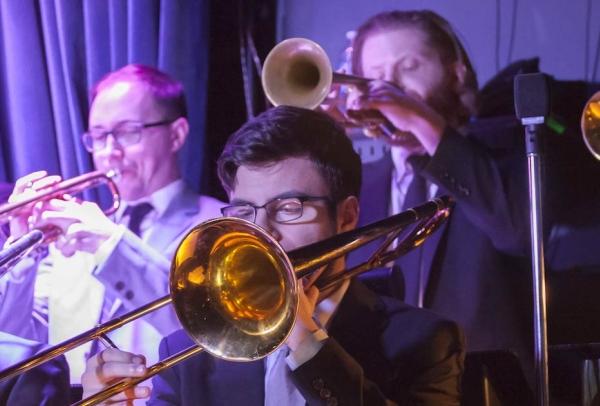 Brazilian Music Ensemble  (Rogerio Boccato)
This ensemble will perform a large repertoire of music covering the most important composers, styles, and regions of Brazil.

Patricia Brennan Ensemble
This ensemble explores compositions by contemporary and influential improvisers as well as standard jazz repertoire with an open minded and creative approach. Also, students are encouraged to explore their own compositions. In addition to learning, arranging, and rehearsing new repertoire, the students explore improvisation-based activities that help develop their own voice as improvisers and composers.

Dezron Douglas Ensemble
This ensemble is focused on getting inside the music. Focusing on the vibration and emotion beyond the notes on the page. Dezron is currently an integral piece in the bands of Ravi Coltrane, Louis Hayes, and Trey Anastasio. The music is a mixture of original compositions, standards, and cultural music.

Billy Drewes Ensemble I
This ensemble will visit alternate, creative approaches to playing a composition while maintaining its integrity. Members are encouraged to write original pieces for the group.

Billy Drewes Ensemble II
"The Green Light Ensemble" is an orchestral improvisatory ensemble. Non- jazz program students, particularly from classical backgrounds are welcomed. The goal of this group is to play freely in a way that one has never experienced before. It is all about creating in the moment!

Drew Gress Ensemble
Drew’s ensemble will focus on integrating composition and improvisation, focusing on ways to derive forms and concepts for elaboration from the written material itself. Bandleading concepts will also be addressed. Each student is encouraged to compose/arrange for the ensemble, where their material will be workshopped. Students will receive feedback and hear suggestions from the ensemble about the possibilities and ideas they hear within the music. Additionally, Drew’s original music will also be performed, as well as music from artists with whom he’s recorded and performed. Extra care will be taken to treat each piece as unique and special, requiring a mindset that allows one to play what they don’t know, rather than what they already do.

World Percussion Ensemble (John Hadfield)
This ensemble will explore the musical traditions of South India and the Middle East. Students will learn South Indian compositions and vocalization techniques as well as the frame drum techniques of the Kanjira, Riq and Darbuka. Participation in this ensemble is determined by the instructor.

Ron McClure Ensemble
This ensemble performs a variety of music including jazz standards and original arrangements by director Ron McClure who has performed with the bands of Charles Lloyd (with Keith Jarrett and Jack DeJohnette), Maynard Ferguson and Buddy Rich.

Tony Moreno Ensembles I & II
These ensembles will work on a wide repertoire of material including original compositions by the instructor, students (2 required), other composers as well as jazz standards.  Focus will be on form, harmony, harmonic rhythm, meter, polyrhythms, and mixed meter.

The NYU Wayne Shorter Ensemble (Dave Pietro)
This ensemble explores the compositions of Wayne Shorter from the earliest parts of his career (Art Blakey, Blue Note sessions), through his work with Miles Davis and Weather Report up to his more recent bands and projects (Atlantis, Alegria).

Chris Potter Ensemble
Chris Potter, renowned saxophonist, received the prestigious "2004 Jazz Critics Award for Tenor Saxophonist of the Year." Finalists for that award included NYU alumnus Wayne Shorter and Joe Lovano. Chris is a member of bassist Dave Holland's touring band, leads his own band, and has toured and recorded with Steely Dan.

The Mingus Ensemble (Mike Richmond)
Charles Mingus' compositions and arrangements provide the foundation for extended improvisation and group interplay. Mike Richmond was the musical director of the original Mingus Dynasty.

Michael Rodriguez Ensemble
This ensemble is directed towards playing a mix of jazz standards and students' original compositions.

Adam Rogers Ensemble
This group is geared towards playing a mix of jazz standards and students' original compositions.

NYU Jazz Orchestra conducted by Rich Shemaria
This group is the flagship ensemble of the NYU Jazz Studies Department and presents public concerts throughout the year. It is dedicated to performing new works by faculty and students. A high level of sight reading, ensemble playing and doubling (for saxes) is required.

NYU Jazz Repertory Nonet
Sight reading is the emphasis in this ensemble which plays music from the large jazz ensemble library.

Brad Shepik Ensemble
This ensemble explores jazz repertoire of different eras with an emphasis on odd meters – rearranging songs in meters such as 5, 7, 9, 11, and 13 as well as delving into the richness of the jazz canon.

World Music Ensemble (Brad Shepik)
This ensemble will explore the fusing of various world folk music with jazz improvisation and aesthetics. The group will focus on Balkan styles and use traditional, contemporary  and original pieces to gain an understanding of odd meters and melodic and harmonic conventions. Students will be strongly encouraged to produce an original work for the ensemble by the term’s end.

Lenny White Ensemble
This ensemble performs a variety of music, including jazz standards and original arrangements.

Martin Wind Ensemble
This group is geared towards playing a mix of jazz standards and students' original compositions.

Michael Wolff Ensemble
Michael Wolff's ensemble concentrates on performing jazz music in an interactive manner. Repertoire will be drawn from jazz standards and Michael Wolff's compositions as well as student compositions. Emphasis is on improvisation and making sure the rhythm section is in sync and swinging and grooving at all times. The value system is Rhythm, Melody, Harmony. As Sonny Rollins has said, "Michael Wolff is one of the greatest musicians I've ever played with.”