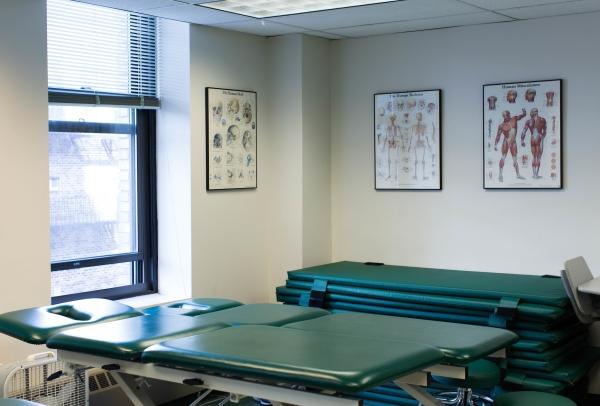 The following is a historical record of the growth of Physical Therapy Education at New York University and the important people who left their marks on our Department and programs.

New York University has one of the oldest and most esteemed physical therapy programs in the country. Established in the School of Education, the Physical Therapy Program leading to a BS degree began enrolling students in 1928 as a unit of the Department of Physical Education, Health, and Recreation, chaired by Dr. Clark W. Hetherington. Dr. Shailer U. Lawton served as both medical and educational adviser. Physical therapy specialization occurred during the senior year and was conducted in collaboration with the Hospital for the Ruptured and Crippled (now known as the Hospital for Special Surgery). The School of Education soon assumed full jurisdiction for both the liberal arts and professional aspects of the program. Faculty held some classes at the Lenox Hill Hospital and at the Hospital for Joint Diseases and students participated in supervised clinical practice at eight different hospitals throughout the city.

In 1932, Dr. George G. Deaver was appointed Medical Adviser and Educational Director of the curriculum. When he became Medical Director of the Institute for the Crippled and Disabled ten years later, Dr. Deaver helped orchestrate a close clinical teaching affiliation between the Institute and the Physical Therapy Program. In addition to his responsibilities at the Institute, Dr. Deaver remained a medical and educational adviser to the Physical Therapy Program, and served as a part-time member of the faculty of the School of Education.

According to the 1942 Annual Report of the Department to the Council on Medical Education and Hospitals of the American Medical Association, William Bierman, MD was the Executive Technician in charge of student training and George Deaver, MD was the physician directing training in physical therapy. Of particular note in the report was the fact that NYU regularly accepted male students, unlike many other physical therapy programs at that time. In addition each instructor was required to teach the physics of each modality in his/her course.

The regular course of study was 9 months long; students were admitted in September and February. Students took 36 points of study. Entrance requirements included graduation from an accredited school of physical education, graduation from a school of nursing, or two years of college training during which science courses such as biology were taken and satisfied. Thus students could be admitted with or without a baccalaureate degree. In 1942, eight students graduated from the program and thirty-three of the initial forty applicants were admitted. Upon graduation, post-baccalaureate graduate students each received a certificate for completing the 36 points of physical therapy study, while undergraduate students each received a baccalaureate degree and a certificate for completing the 36 points in conjunction with other university requirements.

The year 1943 was a landmark year in our Department's history, as it saw the implementation of a post-professional masters degree, a degree that is still in existence.

The year 1945 brought some important and innovative changes in the curriculum. Courses included anatomy, hydrotherapy, ethics and administration, and more.

Students were now assigned to Bellevue Hospital and the Hospital for Joint Diseases for the first 300 clinical practice hours and to Lenox Hill Hospital for the last 100 hours. Physicians and those from the School of Education with professional rank were paid $8.00 per hour for teaching and lower ranks received $5.00 per hour. Courses which required demonstrations and practice, such as anatomy, massage, and electrotherapy were limited to 20 students. The pre-physical therapy program at New York University in 1945 consisted of English; speech; literature; social studies; chemistry/biology/physics; sociology; psychology; child hygiene; first aid; general cultural or liberal arts courses to be selected from arts and crafts, foreign languages, general philosophy, health and recreation, mathematics, and music; and electives by advisement.

In 1946 Elizabeth C. Addoms, who had previously been a teaching fellow, was appointed as Physical Therapy Program Director; Dr. Deaver continued on as Medical Director of the program. The program saw further changes with an increase in duration to 9 months, the discontinuation of February registration, and an increase of clinical practice hours to between 440 and 450 hours at the following facilities: New York Hospital, Hospital for Special Surgery, Lenox Hill Hospital, Bellevue Hospital, Hospital for Joint Diseases, and the Institute for Crippled and Disabled.

The appointment of Elizabeth Addoms marked a significant era in our program's history. During her tenure, the program evolved considerably. Just one year after her 1946 appointment, the physical therapy curriculum expanded to a full year with students receiving either a BS or an MA in conjunction with their physical therapy certificate upon completion of their respective programs. The program was 38 credits for undergraduate students and 40 credits for graduate students. Students were selected on a highly competitive basis. The age ceiling for applicants was 35 years.

When the New York University Institute of Physical Medicine and Rehabilitation (IPMR, now the Howard A. Rusk Institute of Rehabilitation Medicine) was established in 1948 with Dr. Howard A. Rusk as its Director and Dr. George Deaver as its Director of the Children's Division, the Physical Therapy Program again shifted the location of some of its theory courses from the Institute for the Crippled and Disabled to IPMR, an affiliation which continues today. At about this same time, St. Vincent's Hospital was added as another teaching center for selected theory courses and the program added the facilities on Hudson Street, the Knickerbocker Hospital and the New York Reconstruction Home on Staten Island, the Veteran's Administration (VA) Hospital in the Bronx, and the VA Regional Office in New York City to the growing list of clinical placement sites.

In 1967, the Physical Therapy Program became a unit of the newly established Division of Rehabilitation Education of the School of Education. This unit included physical therapy, occupational therapy, vocational rehabilitation counseling, and prosthetics and orthotics.

Dr. Deaver, who had been an important figure in the development of the NYU Physical Therapy Program, retired from the University in 1969. Taking his place as Medical Adviser was Dr. Allen Russek, who served from 1969 to 1971. From 1971 to 1976, Dr. Sanders Davis held the position. Both Dr. Russek and Dr. Davis were members of the medical school faculty during their respective tenures. The Medical Advisers to the Physical Therapy Program were also part-time instructors in the program and maintained continuous contact with students.

The year 1970 was significant in the evolution of New York University's Physical Therapy Program. On July 1, 1970 the Department received approval from New York State to offer a PhD degree program in physical therapy. Then, on September 1, 1970, after twenty-four years of dedicated and devoted service to the program, Professor Elizabeth C. Addoms retired from NYU. Dr. Arthur J. Nelson succeeded her as Physical Therapy Program Director.

To signal the noteworthy development in the tremendous diversity of offerings in the School of Education and to recognize that education extended far beyond classroom service in the conventional setting, the name of the School was changed in 1974 to the School of Education, Health, Nursing, and Arts Professions (SEHNAP), and the Physical Therapy Program joined its Division of Health. In May of 1975 a new mission statement was adopted for the School to fully recognize its remarkable diversity.

In 1975, the Department established the Elizabeth C. Addoms Award for Excellence to honor the recently retired Beth Addoms. The award is given each year to the graduating physical therapy student who demonstrates superior achievement in the academic components of the curriculum and who displays the potential for becoming an outstanding clinician, two areas of the physical therapy educational process that Elizabeth Addoms held in especially high esteem.

A masters degree program in cardiopulmonary physical therapy was approved in 1975 by the New York State Education Department. The program was implemented in 1976 and phased out in 1982 since by that time its content was fully incorporated into the basic preparation program.

The fourteen-month post-baccalaureate certificate program was phased out in 1980; all graduates then received a baccalaureate degree. In February of 1984, thanks in part to a grant from United Cerebral Palsy, the Physical Therapy Department implemented a masters degree program in developmental disabilities. Also in 1984, Dr. Arthur Nelson stepped down as Director of the Department and Professor Eileen Nathanson assumed the Director's role.

In 1984, the Department's faculty began implementation of the profession's educational philosophy that professional education for the physical therapist should be at the post-baccalaureate level. That year, the faculty submitted a proposal to the New York State Education Department for a professional doctoral program leading to a doctoral degree (DPT) based upon a four plus three model. For the next twelve years, the Department waited for State approval. In the meantime, Professor Eileen Nathanson stepped down as Chair, and Professor Andrew J. McDonough assumed the position was appointed Chair of the Physical Therapy Program in 1989.

On March 10, 1995, the NYS Education Department finally approved the doctor of professional studies program (DPS). Over the next year, faculty worked on all activities necessary to effectuate the change. During this time, in September 1997, Dr. Wen Ling succeeded Dr. Andrew McDonough as Chair of the Department. The first professional doctoral students were admitted in July 1998 to the Physical Therapy DPS Program that was directed by Dr. Marilyn Moffat. After this initial class began their studies, the Department petitioned the New York State Education Department to have the degree changed to the Doctor of Physical Therapy (DPT), since three other professional DPT programs existed in other parts of the country. The state granted administrative approval to change the degree to the Doctor of Physical Therapy (DPT) in April 1999.

Following the inception of the professional DPT program, the Department embarked upon the development of a transitional DPT Program for Practicing Physical Therapists. This degree program is designed to enable practicing physical therapists to return to school and upgrade their knowledge and skills to the level of the DPT graduate. The transitional program was approved by the State Education Department in July 2000.

In the Fall of 2000, the University approved a collaborative arrangement between the Department and NYU's College of Arts and Science, resulting in a BA-DPT Program. This program allows undergraduate students in NYU's College of Arts and Science to be admitted to the Physical Therapy Program after receiving their baccalaureate degree, provided they have met all prerequisite requirements.

In the Summer of 2008, the Department announced that a clinical residency program in orthopedic physical therapy would be implemented.  The first class of residents began classes in the Fall of 2010.

Over the years, thanks in large part to the generous support of: 1) teaching grants and traineeships provided by the US Department of Health, Education and Welfare, the US Department of Health and Human Services, and the Rehabilitation Services Administration; 2) scholarships from the National Foundation; and 3) a variety of other public and private health agencies, businesses, and fraternal organizations, NYU's Physical Therapy Program has graduated over 3000 therapists who are currently practicing throughout the world. Our graduates practice in all types of professional settings including private, voluntary, and governmental agencies and services.

Currently over 350 hospitals, rehabilitation centers, community health agencies, and private practices within commuting distance of the Greater New York Metropolitan area participate in the NYU program of professional physical therapy education. The program also utilizes over 120 facilities nationwide. Moreover, the Department is especially indebted to the research and teaching talents of its distinguished faculty consisting of outstanding physicians and physical therapists such as Elizabeth C. Addoms, Signe Brunnstrom, Mary Eleanor Brown, George Deaver, Jack Hofkosh, Shailer Lawton, Edith Lawton-Atkins, Marilyn Moffat, Arthur J. Nelson, and Barbara White who have contributed to the overall strength and consistent improvements of the program, and to the cooperation of a multiplicity of health care facilities and alumni.

Now, nearing a century of educationally preparing physical therapists for practice, New York University continues to maintain its outstanding reputation and will continue to meet the needs of an ever-expanding profession.