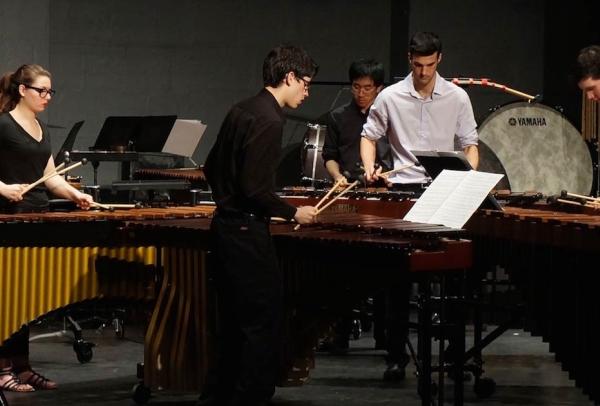 Percussion Chamber Music Ensemble is dedicated to preserving the seminal works of the past, while continuing to push the envelope and explore new and diverse music. Each year the ensemble presents several unique performances, collaborating with composers from around the world, and continuing to enrich the marimba repertoire. Boyar and his ensemble constantly strive to break down boundaries between classical and popular music. The ensemble has collaborated with many well-known artists including: Javier Diaz, Daniel Levitan, Andy Thomas, Peter Fish, and Robert Miller.

Aurel Hollo is a member of the critically acclaimed Hungarian Amadinda Percussion Quartet. In addition to his percussion playing, he is noted for his composition and teaching abilities, holding a position at the Bela Bartok Conservatory Budapest. This flurry of a quartet utilizes a multitude of percussive instruments and playing techniques. José / beFORe JOHN5 begins with a rousing pattern of handclaps that lay the foundation for the Spanish feel of the composition. Two marimba players then present the relentless thematic material. The performers execute the lines while standing on opposite sides of the instrument, evenly splitting each phrase in quick note groupings of two and three. Meanwhile, the other two percussionists provide a variety of punctuation, swiftly changing between grooves and impact points. The sonic palate includes instruments such as cajon, castagnettes, burma gongs, talking drums, and tambourine. After much variation, a cut time section leads into a marimba solo that catapults the piece into a breakdown where all players play non-pitched instruments. The concluding section showcases a rather unconventional percussion instrument: the guitar. Rattan rods are used to transform this string instrument and drive the composition to a vivacious finale. (Matthew Overbay)

Mallet Quartet by Steve Reich is scored for two five-octave marimbas and two vibraphones. This piece is broken into 3 movements. The outer movements have the marimbas playing a predominantly static accompaniment part for the vibraphone to play over. What makes the vibraphone parts so interesting is that the vibraphone 1 player presents the melodic information in each new section and the vibraphone 2 part responds in canon. It creates the effect of an echo, having each part bounce off one another.

The second movement is beautifully juxtaposed in how sparse the orchestration is in comparison, giving it a “thinner” quality. With the marimbas and vibraphones playing mostly quarter notes and half notes, the second movement has a unique depth and expression in the body of the piece.

It is interesting to note that this was Steve Reich’s first exploration into the world of five-octave marimba writing. It was co-commissioned by the Amadinda Quartet in Budapest, on the occasion of its 25th Anniversary, Nexus in Toronto, So Percussion in New York, Synergy Percussion in Australia, and Soundstreams in Canada. The world Premiere was given by the Amadinda Quartet in Bela Bartók National Concert Hall on December 6, 2009. The American Premiere was given by So Percussion at Stanford University Lively Arts in California on January 9, 2010. (Sean Perham)