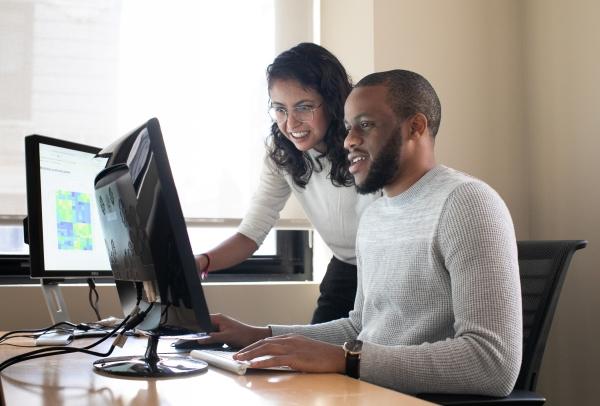 The highly-selective PRIISM Opportunity Fellowship supports the growth and development of two promising students in their first year of the Applied Statistics for Social Science Research MS program.  Fellows will gain experience and skills by engaging with data-driven research teams led by PRIISM faculty who are using data to address societal issues.

Fellows will engage in activities that will provide them with critical training in many aspects of statistical research consulting.  In particular they will have the opportunity to engage in the following research-related activities.

This fellowship will provide the student with several supports and benefits.  In the fall semester, the student will receive a $5,000 fellowship stipend.  In the spring semester, contingent on reaching fall milestones, the student will be hired onto a PRIISM-affiliated research team to gain valuable work experience (with salary starting at $3,500). Throughout, the fellow will be supported through regular check-ins with their faculty mentor.

All applicants to the program will be considered for this fellowship.  No separate application process is required. Preference will be given to students who identify as belonging to groups underrepresented in STEM fields. Preference will also be given to students who explicitly express interest in pursuing research or work that will benefit society.

Karen D. Britt is from the Bronx. She graduated in May 2021 from CUNY Lehman College with a BA in Sociology, minoring in data science. She has had multiple data analytic internships, including a data science five-week program with Microsoft. Karen is currently a first-year masters’ student in the applied statistics program and will graduate in May of 2023. Her career goals are to conduct meaningful research of health disparities in New York City that can assist policymakers in creating programs that will help improve the quality of life for all New Yorkers regardless of where they live. Karen enjoys how data science can be used to learn more about the world with a more logical lens. She thinks it’s amazing how we can use data to make more informed decisions that lead to a more impactful outcome. She cares about social impact because we are in a time where there are the means to give everyone the resources they need to thrive. Quality of life shouldn’t matter depending on what town or neighborhood you live in. It’s important that the social impact made is positive and improves the lives of those who are impacted. Karen is a fellow on the Illinois Department of Corrections (IDOC) project with NYU’s Marron Institute of Urban Management. She enjoys working on the project thus far because she is able to conduct research that will help improve the prison system.

Jaylene Quito was born and raised in NYC, specifically in East Harlem. Growing up, she always had a passion for helping out people within her community. Due to this passion, she tried to pursue a degree in social work but realized her calling was in the research field. She received a BA in Sociology from CUNY Lehman College in the first graduating class of the pandemic, 2020! She has done several research projects and has traveled as far as Barcelona to conduct research. Analyzing data and data visualization are her favorite parts of the research process. She is currently in the Applied Statistics for Social Science Research program and will graduate in May 2023. Jaylene plans to continue being a researcher and has always wanted to find a way to use her skills to help the immigrant and/or mental health population. She has a strong connection with them and would do anything to help their voices be heard. In data science, she enjoys being able to make her research presentable and understandable to anyone. People may not understand the numbers or conclusions made, but being able to mediate that issue is such a rewarding job. People deserve to understand new information given to them and find out how it can benefit them. In terms of social impact, Jaylene has experienced both sides of the coin. Needing the help and being able to give the help. Being brought up by undocumented parents and having one taken away from you because of immigration laws, makes you realize that a lot has to be done in the system. She is just trying to be the change she wants to see. Jaylene is working with the Brito Lab on the COVID-19 & Perinatal Experiences (COPE) Study. From her experience thus far, she has absolutely loved seeing everyone's enthusiasm about the project. There are so many aspects to the project and everyone brings something to it. It's the fact that everything comes together perfectly that makes me excited to continue to work on this project.

Adrian Harris is currently a first-year master's student in the Applied Statistics program. Before coming to NYU, he received a Bachelor of Business Administration from CUNY- Baruch College in Spring 2020. He enjoys working with raw data and transforming it into knowledge that can better the lives of people around him.

As a PRIISM Opportunity Fellow, Adrian has had the opportunity to learn from his mentor, Professor Marc Scott on a research project titled “Tale of Two Cities: London and New York City during the COVID-19 pandemic.” The project includes compiling community characteristics from multiple sources and linking these to COVID-19 case rates over time. Comparability of data across the two cities and the technical challenges inherent in this are crucial to the project’s success. The project excites him every day and his favorite parts are working with an amazing advisor and working with untidy data. He has learned more about the research process and libraries like the lubridate package in R during his time as a fellow.

Adrian cares about social impact. He was born in Brooklyn but has lived in Elmont, New York the majority of his life. He has lost many friends to suicide and addiction and would like to bring more light to underrepresented groups and the issues that disproportionately affect them.

After he graduates in Spring 2022 from NYU, Adrian plans on joining the Peace Corps for two years and then pursuing a PhD. to pursue research in mental health, addiction, and other human behaviors.

Nicole Salani grew up in the village of Mahalapye, Botswana. She completed her bachelor's degree in Economics and Statistics at Williams College. Her interest in unearthing knowledge from data was sparked during a summer internship in Capetown during her sophomore year at Williams.

Nicole is currently studying for an MS in Applied Statistics and is planning to graduate in 2022. After this, she would like to continue to conduct research on human health and behavior. She is interested in the application of data science and statistics in policy implementation around public health, education, and other socio-economic issues that affect people's livelihoods.

With the right statistical and data science tools, she believes that one can uncover and help rectify inequities; or steadily guide the complicated process of recovering from a hurricane and other devastating natural disasters; as well as understand and map the impact of human activities on the environment. She enjoys the feeling of empowerment that comes with leveraging data science and statistics to face such challenges head-on.

As someone who cares about social impact, she would like to see a better world because she believes in Ubuntu (humanity). There is a saying in the region she comes from that is rooted in this humanist African philosophy of Ubuntu: "Umuntu ngumuntu ngabantu" ; "motho ke motho ka batho.” This essentially translates to, “I am because we are and as such we owe it to one another to make the world a better place together, for all of us.” And (selfishly, she feels) it makes her feel good. She thinks that data science and statistics may be a way to achieve this type of impact.

As a PRIISM Opportunity Fellow on the Illinois Department of Corrections (IDOC) project headed by Angela Hawkins at the Marron Institute at NYU, Nicole enjoys collaborating with the team and likes that the work they do might actually change the lives of those who are incarcerated and hence generally tucked away from society's compassionate eyes. There are glaring and cruel inequities within the prison system and there is a lot of work to do to fix that. She is humbled that the team’s work moves the needle on these inequities.