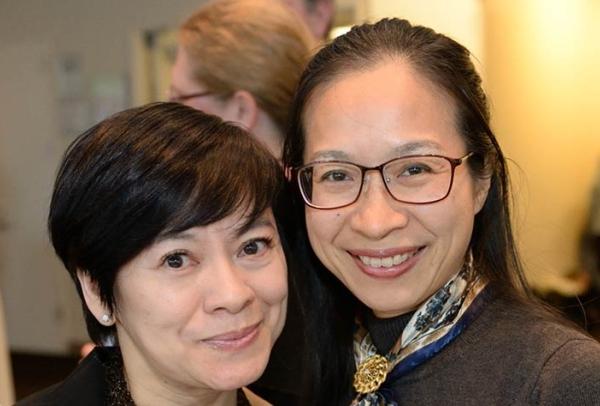 From 2011 to 2016, Mr. Marshall worked at BAM (Brooklyn Academy of Music), first in the marketing department and ultimately as the Manager of Artistic Planning under Executive Producer Joe Melillo. He has also worked at the Smithsonian Institution (in Washington, DC), Chez Bushwick, and The Kitchen in varying capacities from curatorial/programming to marketing and fundraising. He earned his masters in Performing Arts Administration at NYU in May 2011 with a focus on arts marketing. Ross is an active musician (drummer/percussionist) with a background in both rock/popular music and contemporary classical music.

Lesley Alpert-Schuldenfrei is a performing arts marketing professional with over 20 years of experience creating strong brands and building audiences in diverse forms of entertainment ranging from Broadway and the circus arts to classical music and jazz. Currently the general manager for marketing for the live art series at the Metropolitan Museum of Art, Lesley has guest lectured at NYU and shared her marketing expertise on various panels throughout the greater New York area.

Prior to her appointment at the Met, Lesley worked in marketing departments for several high profile cultural institutions, including the Guggenheim Museum, Lincoln Center Theatre, and Museum of the City of New York. She also oversaw marketing for New York’s premier traveling circus, the Big Apple Circus. In her time on Broadway, Lesley launched the marketing campaigns for the Tony Award-winning shows Wicked and Caroline, or Change. She holds a BA from Emory University and an MA in Performing Arts Administration from NYU.

Raymond T. Grant (MA, 1984) has enjoyed a multi-faceted career in the arts, education, business, and creative industries, having served as director of the Tisch Center for the Arts at the 92nd Street Y, general manager of the American Symphony Orchestra in New York City, executive director of Robert Redford’s Sundance Resort, and artistic director of the Olympic Arts Festival for the 2002 Salt Lake City Olympic Winter Games.

Kyle Pickles has been the company manager for American Ballet Theatre since July 2012. As the company manager, Kyle is responsible for the touring logistics of a company consisting of 130 dancers, crew, and support staff. While at ABT, he has toured throughout the United States and around the world, including Abu Dhabi, Australia, Cuba, Hong Kong, Japan, and Oman. Kyle was formerly American Ballet Theatre’s Associate Company Manager and worked closely with the marketing department to manage ticketing for the company’s New York seasons, including the annual eight week spring season at the Metropolitan Opera House.

In addition to his work at American Ballet Theatre, Kyle currently teaches a course entitled Managing the Production at SUNY Purchase, alongside working professionals in the fields of stage and production management.

Kyle was formerly a general management assistant at 101 Productions, a commercial theater general manager, and worked alongside the company management teams on a variety of productions including Spamalot and The History Boys.

Before moving to New York to attend New York University, Kyle worked as a team leader at Whole Foods Market in St. Louis, Missouri, managing a team of 12 employees in the specialty foods department after transitioning from a career as a member of Actor’s Equity Association performing summer stock at the St. Louis Municipal Opera since 1995.

Kyle earned his BS in Combined Science from Santa Clara University and his MA in Performing Arts Administration from NYU.

Rebecca Habel has been the general manager of more than 30 productions on and off-Broadway. Broadway credits include: The 39 Steps, A Man for All Seasons, Hedda Gabler, The Philanthropist, After Miss Julie, Present Laughter, Everyday Rapture, Mrs. Warren’s Profession, The Importance of Being Earnest, and most recentlythe Olivier Award-winning production of King Charles III. She has worked in general management at the Vineyard Theatre, Roundabout Theatre Company, 101 Productions, and Thompson Turner Productions. She is a faculty member at New York University in the Tisch School of the Arts Production and Design Program. In 2015, with Terry Kinney, she co-founded Mix Tape Productions, a theatrical concert production company. Reconfiguration: An Evening with Other Lives was Mix Tape’s inaugural production, which was presented in BAM’s 2015 Next Wave Festival at the Howard Gilman Opera House.

Cecelia Fitzgibbon (MA 1982) is the president of Moore College of Art & Design. President Fitzgibbon serves as executive editor of The Journal of Arts Management, Law and Society. She has been a speaker nationally and internationally on topics of leadership in the arts and cultural policy. She was the lead researcher for the Philadelphia component of the National and Local Profiles of Cultural Support Project, a collaborative project with the Greater Philadelphia Cultural Alliance that investigated how the nonprofit cultural industry was supported in ten communities across the United States.  From 1996 to 2012 she served as the Director of the Graduate Arts Administration program at Drexel University, achieving the rank of Full Professor.  She also served as the Chair of the newly formed Department of Arts and Enterprise from 2010-2012 and prior to that as Chair of the Department of Performing Arts from 2001-2010.

She was the founding project manager for the Pennsylvania Cultural Data Project (now the Cultural Data Project), at the time a collaborative effort of the Pew Charitable Trusts, the William Penn Foundation, the Heinz Foundation and the Pennsylvania Council on the Arts. Together with key leaders of the Pew Culture Program, she also conceptualized the original guidelines for the Philadelphia Cultural Management Initiative, a capacity-building program for professional arts organizations in the region currently housed at the Pew Center for Arts and Heritage.

President Fitzgibbon served as executive director of First Night Wilmington from 1995 to 1996. Prior to that, she was senior vice president of ArtsMarket Consulting, Inc., where she conducted program planning and evaluation for clients including the Rochester Area Foundation, Southern Arts Federation, Georgia Council on the Arts, Mississippi Art Museum, New Stage Theater, West Virginia Department of Cultural Affairs, New York State Association of Museums and the Guggenheim Museum Learning Through Art Program.

From 1993 to 1994, President Fitzgibbon directed policy planning, program design, fund raising, communications and organizational development as executive director of the New England Foundation for the Arts (NEFA). In this capacity, she instituted the region's cultural facility fund, a technical assistance program and loan fund for the development of arts facilities, and inaugurated the first year of the New England Artists Trust.

President Fitzgibbon also spent eight years as director of the Delaware Division of the Arts, where she led the concept, design, and implementation of a $21.5 million arts stabilization project; the creation of the state's first economic impact study model; the development of a nationally recognized dance residency program; the evaluation and design of highly-acclaimed arts in education programs; the establishment of an arts standards and assessment commission; and the institution of the agency's first strategic planning process.

President Fitzgibbon earned a BS from the University of Massachusetts in Landscape Architecture and Regional Planning and an MA in Arts Administration from New York University.  She is married to artist Scott Cameron and has two sons, Stuart Cameron who is an MBA candidate at the Darden School of Business at the University of Virginia and Ross Cameron who is a graduate of Bard College and a Program Assistant at Design Philadelphia of the Center for Architecture.

Joseph Morrissey is the Director of Dance at Interlochen Center for the Arts, after serving as Director of Artistic Planning and Touring for The Hong Kong Ballet. He has danced with the Bavarian State Ballet in Munich, Germany, the Boston Ballet, and the Charleston Ballet Theatre. Joseph holds a Master of Arts in Performing Arts Administration from New York University in addition to a Bachelor of Science in Classical Ballet from The Jacob’s School of Music at Indiana University. He is a four-year graduate of The Harid Conservatory in Boca Raton, Florida.

In 2009 and 2010 Joseph was invited to choreograph for The Stuttgart Ballet’s Noverre Society where he worked with dancers of the Stuttgart Ballet company in Germany. He was further selected to participate in the 2011 New York Choreographic Institute, an affiliate of the New York City Ballet, where he choreographed for the advanced level students at the School of American Ballet to a commissioned score by Michael Ippolito of the Juilliard School. In July 2013 Joseph’s choreography was featured throughout Italy and Sicily with the Roberto Bolle and Friends from American Ballet Theatre galas, and in September 2014 Joseph’s work was performed at the Ballet Philippines 45th Anniversary gala performances held at the Cultural Center’s National Theater in Manila. In June 2015 Joseph completed an Artist Residency at The University of Akron after teaching and setting his work for the Princeton University Ballet in January that same year. Joseph has also choreographed for the Festival Ballet d’Adriatico held in Ascoli Piceno, Italy and the Inside / Out performance series presented by The School of Ballet at Jacob’s Pillow, a program of which he is a two-time alumnus.

From 2012-2013 Joseph served as the Director of CORPS, a pre-professional classical ballet high school program for select students pursuing careers and higher education in dance. He has instructed classes for Ballet Preljocaj and Spellbound Contemporary Ballet and is a member of The International Vaganova Method Society, having completed the Vaganova Ballet Academy’s annual methodology seminar in St. Petersburg, Russia. Joseph was a selected participant in the 2015 Dance/USA Institute for Leadership Training, a platform for emerging and notable leaders in the professional dance field sponsored by the American Express Foundation and the Andrew W. Mellon Foundation.