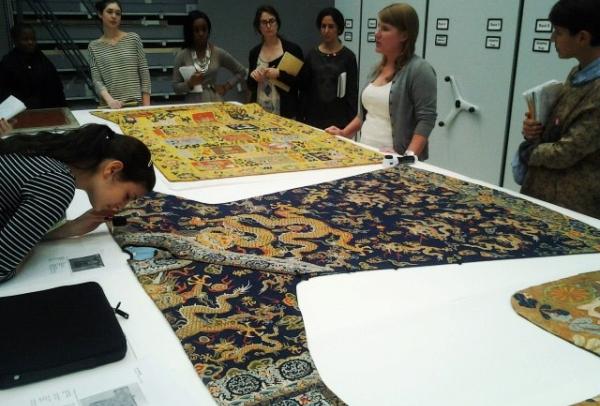 Nancy Deihl, Chair of the Department of Art and Art Professions, is a historian of fashion who specializes in the period from the mid-19th century to the present, concentrating on the American fashion industry. With many years of experience in the field of modern and contemporary art, she is particularly interested in connections between fashion and art practices. She has been with the art department since 2003 as Director of Costume Studies. She previously taught at Fashion Institute of Technology. Deihl co-authored, with Daniel James Cole, The History of Modern Fashion (2015: Laurence King) and is the editor of The Hidden History of American Fashion: Rediscovering 20th-Century Women Designers (2018: Bloomsbury). Other writing and editorial projects include guest editorship and numerous contributions to Grove Art Online/Oxford Art Online; an article on the fashion and costume designer Zelda Wynn Valdes for Oxford's African American National Biography; articles in Vestoj and The Conversation. Her chapter on modernist fashion of the 1920s appeared in Charles Sheeler: Fashion, Photography, and Sculptural Form (2017: James A. Michener Art Museum). "Slippery Slopes: Skiing, Fashion, and Intrigue in 1960s Film," co-authored with Marilyn Cohen, appeared in Leisure Cultures and the Making of Modern Ski Resorts (2019: Palgrave).  Deihl contributed a chapter on the American fashion designer Wesley Tann to Black Designers in American Fashion (forthcoming in 2021: Bloomsbury).  She lectures widely on fashion history topics and is frequently consulted by the press. Deihl received her MA in Costume Studies from New York University in 2002.

Rachel Lifter joined the MA Costume Studies program in fall 2020 as Clinical Assistant Professor and Program Director. She is an expert in the social and cultural analysis of fashion, with a specific focus on popular fashion cultures. Professor Lifter is the author of Fashioning Indie: Popular Fashion, Music and Gender (Bloomsbury 2019), which charts the gendered and racialized transformation of indie from British music subculture to international fashion phenomenon. Her writing also appears in Communicating Fashion Brands (Routledge 2020), Fashion Stylists (Bloomsbury 2020), Fashioning Professionals (Bloomsbury 2018), Fashion Cultures Revisited (Routledge 2013) and the exhibition catalogue for “Clash – Resistance in Fashion” (Herning Museum of Contemporary Art, 2014). Professor Lifter’s current projects focus on the USPS letter carrier uniform and the impact of the AIDS epidemic on New York’s fashion industry. Previously, she held faculty positions at Parsons School of Design (2013-2020) and London College of Fashion (2008-2013) and was the Reviews and Open Space editor of the International Journal of Fashion Studies from 2014-2017.

Magali An Berthon is a French-Vietnamese textile historian focusing on Southeast Asian textiles and silk in particular, local craft cultures, and sustainable processes, also incorporating filmmaking in her practice. After earning an MFA in textile design at the National School of Decorative Arts in Paris and working for the fashion industry for nearly ten years, she studied Fashion and Textile Studies at FIT in New York on a Fulbright Fellowship in 2014. She continued with one year of fellowship at the textile curatorial department at Cooper Hewitt Design Museum. She is currently completing a PhD in History of Design at the Royal College of Art in London, exploring the dynamics of silk heritage in contemporary Cambodia. In parallel she is an adjunct instructor teaching Textile Studies at the NYU Costume Studies program and other universities in New York. Her recent projects include: Tissus & Artisans du Monde (World Textiles & Artisans) web-documentary, The Creative Resource Book: Crafting Laos and Cambodia, Singapore: ASEF Foundation, 2019, ‘Artisans Angkor: Reclaiming Cambodian Silk Crafts under French Patronage (1992-2017)’ in Journal of Textile Design and Research Practice vol.7 (1), May 2019.

Sarah C. Byrd is a fashion historian, archivist, and educator. She holds an MA in Fashion and Textile Studies from the Fashion Institute of Technology where she also teaches in the Graduate Studies programs. At New York University she teaches the History of Textiles:The Modern Era course. As an archivist, Sarah has worked on a wide range of projects for both private clients and large corporations including Condé Nast and Ralph Lauren. Her independent research focuses on early twentieth-century women’s novels and related films, the history of American cults and communes, and the role of exhibitions in education.

Daniel James Cole received his BA from the University of Washington, and his MFA from NYU Tisch School of the Arts. He is co-author of The History of Modern Fashion (Laurence King, 2015). Cole contributed a chapter about designer Sandra Garratt to The Hidden History of American Fashion: Rediscovering 20th-Century Women Designers (Bloomsbury, 2018). His areas of expertise include dress history since 1850, opera and fashion, religiously motivated dress, and Malaysian and Indonesian dress and textiles. Current research includes hijab customs of Southeast Asia, and transformations of the traditional dress of Dayak and Kadazan-Dusun peoples of North Borneo. Cole presents at academic conferences internationally. His 2011 paper “Heritage and Innovation: Charles Frederick Worth, John Redfern, and The Dawn of Modern Fashion” appeared in French translation in the journal Search Mode by Institut Français de la Mode, and his paper “Dumpster Chic and Haute Homeless: Placing Brother Sharp in a Fashion Industry Continuum” was presented at the Costume Society of America 2015 Northeast regional conference. Cole’s plenary address for the Jane Austen Society of North America 2012 Conference was published in Persuasions On-Line, the society’s journal. He has curated two exhibitions for Opera America / National Opera Center. His costume design credits include; off-Broadway, film, and at opera companies throughout the United States, including Seattle Opera, New York Chamber Opera, Opera Cleveland, and Wolf Trap Opera.

Ann Coppinger heads the Conservation Department of the Museum at the Fashion Institute of Technology in New York City. She holds a Master of Arts degree in Museum Studies specializing in costume and textile conservation from FIT. She was the 2001-2002 National Endowment for the Arts Master Apprentice at the Textile Conservation Workshop in South Salem, N.Y., where she continued as a staff conservator for another four years. Professor Coppinger currently teaches an online course for The Northern States Conservation Center on the care of textiles, in addition to teaching undergraduate courses at Parsons School of Design.  Prior to taking her Museum Studies degree, Professor Coppinger worked for 22 years in the fashion industry in New York City. She has degrees in both fashion design and pattern making from FIT, as well as a Bachelor of Science degree in marketing from Saint John’s University.

Mellissa Huber, Assistant Curator in The Costume Institute at The Metropolitan Museum of Art, teaches Graduate Projects: Exhibition Praxis in the Costume Studies program. Since joining the museum in 2012, she has assisted the curatorial team with research and content development for special exhibitions that include: Masterworks: Unpacking Fashion (2016), Manus x Machina: Fashion in an Age of Technology (2016), Jacqueline de Ribes: The Art of Style (2015), China: Through the Looking Glass (2015), Death Becomes Her: A Century of Mourning Attire (2014), Charles James: Beyond Fashion (2014), Punk: Chaos to Couture (2013), and the forthcoming Heavenly Bodies: Fashion and The Catholic Imagination (2018). Mellissa received her BFA from the Fashion Institute of Technology with a minor in Art History. She holds an MA in Costume Studies from New York University, and a certificate in Curating Fashion from the Victoria & Albert Museum, London.

Elizabeth Marcus is associate director of Galerie St. Etienne in New York where she has worked for over 25 years.  She has taught at the Fashion Institute of Technology, Pratt Institute, Sotheby's and The School for Visual Arts.  Professor Marcus has lectured widely on the history of 20th century fashion photography and the history of 20th century design.  At New York University she teaches courses on Fashion Photography, 20th Century Design, Contemporary Design, and Art Collecting.

Elizabeth Morano teaches the first-year core courses in the NYU Costume Studies program, and has also taught Costume III: Twentieth Century as well as Fashion as Art. Also at NYU, she has been a Gallatin adviser where she conducted tutorials and independent studies. As adjunct faculty at Parsons The New School since 1987, she created and taught various courses in fashion history and theory, with an emphasis on gender and the body. She is the author of Sonia Delaunay: Art Into Fashion (Braziller, 1987).  From 1977 to 1992, she held the position of Publisher’s Assistant for The New York Review of Books. Professor Morano specializes in the history and literature of fashion from the early modern period through nineteenth century, with a particular focus on Second Empire dress.