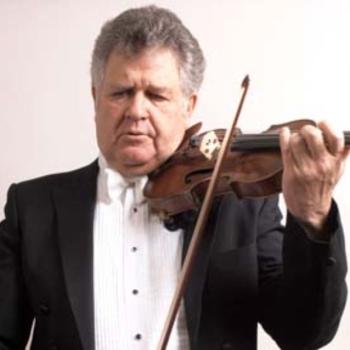 Shmuel Ashkenasi, first violinist of the Vermeer Quartet and Professor of Violin at Northern Illinois University, holds the Artist Diploma from the Curtis Institute of Music.

He performs extensively as a soloist in the United States, Europe, South America, the former Soviet Union, and Japan.  His personal recording credits include the Paganini Violin Concerti with the Vienna Philharmonic, recorded for Deutsche Grammophon; the Mozart Violin Concerto No. 5, KV219, and the Beethoven Romances with the Zurich Chamber Orchestra, recorded for Tudor Records.

In 1962, he was awarded second prize at the Tchaikovsky Competition in Moscow, causing an international sensation as well as a musical triumph since his country, Israel, had no diplomatic relations with the Soviet Union at the time.  He then went on to win the Merriweather Post Contest in Washington, D.C.  He began musical training in Tel Aviv, and later studied with Efrem Zimbalist at the Curtis Institute.  In 1969, Ashkenasi founded the Vermeer Quartet, one of the preeminent string quartets.