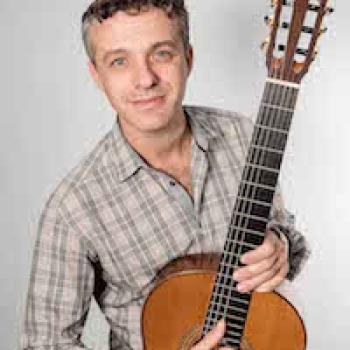 Combining his talents as a guitarist, educator, writer, and composer, Rami Vamos has created a wide array of original musical events ranging from children’s theater to concert music. His shows encourage people of all ages and backgrounds to explore music in the classical genre. Mr. Vamos works closely with the Chamber Music Society of Lincoln Center as a curriculum planner, writer, composer, and host for both their Chamber Music Beginnings concert series and CMS Kids programs.

Mr. Vamos began his career in education as a New York City Teaching Fellow. He currently teaches general music and conducts choir in Pelham, NY. He is on the guitar faculty of Concordia Conservatory in Bronxville, NY, where he also serves as string department head. His original compositions have been heard on CBS, Fox, and NPR. In 2003, he received a Meet the Composer Grant, which brought him to the Raritan River Concert Series. His work was premiered there by the Newman & Oltman Guitar Duo. In 1994, he collaborated with guitarist Randal Avers on a set of guitar duets called “12 Silly Songs for 12 Silly Strings.” The work was published by Clear Note Productions in 2014. He has also collaborated with his wife, violinist Nurit Pacht, on a series of original compositions for violin and guitar, which they have performed in summer festivals and venues around the country.

Mr. Vamos has written several education articles for Soundboard magazine and The New York Times Schoolbook blog. He has earned degrees from Oberlin Conservatory, where he studied with Stephon Aron; the Yale School of Music, where he studied with Benjamin Verdery and received the Eliot Fisk Prize; and Queens College. He lives in New Rochelle, NY, with his wife and their three children.