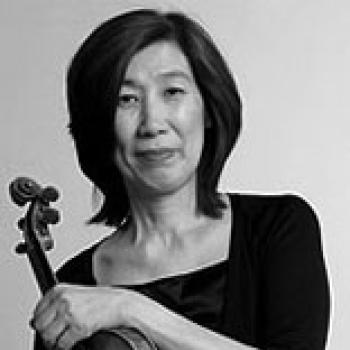 Born in Tokyo, Japan, Naoko Tanaka started playing violin at the age of four and studied at the Toho School. She won several prizes and competitions as a young violinist. In 1972 she moved to New York to study violin with Dorothy Delay and chamber music with Felix Galimir.

Ms. Tanaka is a member of the Orchestra of St. Luke's, Orpheus and the Theater Chamber Players in Washington, DC. She often performs in Japan as a soloist, playing chamber music, and as a leader of a chamber orchestra under Seiji Ozawa. She has recorded the Kurt Weill Violin Concerto, a Bach Concerto, and chamber works by Schubert and Mozart. In addition, she has recorded for Deutsche Grammophon as a member of Orpheus.

Ms. Tanaka also devotes much time and energy to teaching at NYU Steinhardt and Aspen Music School during the summer. Previously she was on the faculty at the University of Cincinnati College-Conservatory of Music and the New England Conservatory.