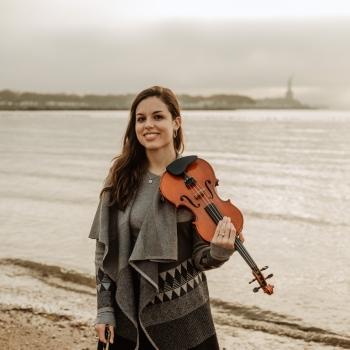 Meghan Todt Williams is a violinist, educator, and artistic producer. Ensembles with which she performs include the New York Pops, American Composers Orchestra, American Ballet Theatre, American Symphony Orchestra, Westchester Philharmonic, Boca Symphonia, and Festival Orchestra Napa. She also served as acting principal second violin of the Glens Falls Symphony and was a member of the Berkshire Opera orchestra for two summers. Venues at which she has performed include the Metropolitan Opera, Stern Auditorium/Perelman Stage at Carnegie Hall, David Geffen Hall and the David H. Koch Theater at Lincoln Center, the Rose Hall at Jazz at Lincoln Center, Madison Square Garden, the Beacon Theater, Forest Hills Stadium, Verizon Hall at the Kimmel Center in Philadelphia, and Royal Albert Hall in London. She has served as concertmaster for collaborative concerts at McCarter Theatre Center and has performed with a number of popular artists and bands, including Glenn Frey and the Eagles, Roger Daltrey from the Who, Darlene Love and Steven Van Zandt, Andrea Bocelli, Sarah McLachlan, Cyndi Lauper, Boy George, Carly Rae Jepsen, Terence Blanchard, and Trace Adkins. Since 2020, she has contributed to the musical life of northern New Jersey through the Jersey-City based Trio W.

Williams teaches violin, chamber music, and pedagogy at New York University, where she is also a PhD candidate in Music Education and from which she received a Master of Music in Violin Performance. Independently, she maintains a vibrant Suzuki-based studio, co-teaches group classes through Bow & Heart, and is an associate producer for Festival Napa Valley and Festival of the Arts Boca.

Williams is also an alumna of Princeton University, from which she received a Bachelor of Arts in Music, with certificates in Music Performance and Italian Language and Culture. During her undergraduate career, she was awarded the Princeton Peter B. Lewis Fund for summer music festival study, as well as a full thesis grant, allowing her to conduct research in Italy, and she was one of the first four Princeton students to attend the Royal College of Music in London for a semester exchange. Her primary teachers have included Laurie Hamilton, Gregory Fulkerson, and Davyd Booth.