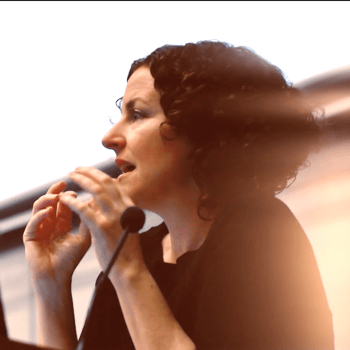 Mara Mills is Associate Professor of Media, Culture, and Communication at New York University with expertise in sound studies, disability studies, business history, the history of electronics, and the history of the telephone. Her book Hearing Loss and the History of Information Theory is forthcoming from Duke University Press. Mills is currently working on the history of optical character recognition and, with Jonathan Sterne, she is co-authoring a book titled Tuning Time: Histories of Sound and Speed. She has published articles in Technology & Culture, IEEE Annals of the History of Computing, Grey Room, differences, Social Text, and PMLA, among many other academic journals. Her writing has been translated into German, French, Spanish, and Portuguese. Details about her research, grants, and awards can be found at her website.

Mills co-edited a special issue of Grey Room on "Audio/Visual" (with John Tresch), as well as a special issue of Catalyst: Feminism, Theory, Technoscience on "Crip Technoscience" (with Kelly Fritsch, Aimi Hamraie, and David Serlin). With Alexandra Hui and Viktoria Tkaczyk, she co-edited Testing Hearing: The Making of Modern Aurality (Oxford UP). With Rebecca Sanchez, she has also co-edited a new edition of And No Birds Sing, Pauline Leader's memoir about life as a deaf working-class runaway among the bohemians of Greenwich Village in the 1920s (Gallaudet University Press 2016, reviewed on H-Disability). She and Sanchez are currently co-editing Crip Authorship: Disability as Method (under contract, NYU Press, 2022/3). With Faye Ginsburg, Harris Kornstein, and Rayna Rapp she is directing an NSF-funded project on Covid-19 and disability communities in New York, to result in an edited volume tentatively titled How to be Disabled in a Pandemic.

Mills has been interviewed and her research has been featured in popular venues including The New York Times, TechCrunch, 99% Invisible, Gizmodo, Trailblazers with Walter Isaacson podcast, The Atlantic, The Boston Globe, The Chronicle of Higher Education, Ploughshares blog, and Red Bull Music Academy Daily. Her public arts and humanities writing can be found at sites like Triple Canopy, Artforum, Bomb, Public Books, Somatosphere, and AVIDLY—a channel of the Los Angeles Review of Books.

Mills is a founding member of the steering committees for the NYU cross-school minors in Science and Society and Disability Studies. With Faye Ginsburg, she is co-founder and co-director of the NYU Center for Disability Studies. She has served on the executive council (2016-2018) of the Society for the History of Technology, and she is a founding editor of the award-winning journal Catalyst: Feminism, Theory, Technoscience.

Explores theoretical, methodological, and archival strategies for research on early or obsolete media artifacts. This seminar functions as an ongoing research studio while discussing central texts in the field of media archaeology.

This course provides a graduate-level introduction to the field of Science & Technology Studies (STS). We will survey the ways scholars in STS-whose research methods range from historical epistemology to medical anthropology to the sociology of science-have understood the natural world, technical systems, human perception, & the social order to be co-produced. Following Bruno Latour, throughout the course we will investigate "matters of fact" as always "matters of concern."