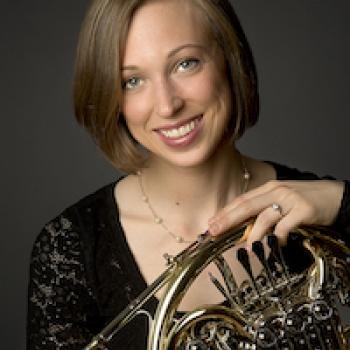 A northern-Michigan native, Ms. Sterrett grew up in a musically enthusiastic family and attended Interlochen Arts Academy. She received her bachelor’s degree from the University of Wisconsin–Madison and a master’s degree from the Yale School of Music. Her primary teachers include William Purvis, Douglas Hill, and Julie Schleif. Ms. Sterrett has spent summers at the Tanglewood Music Center, the Pacific and Sarasota music festivals, the National Orchestral Institute, and the Banff Centre for the Arts. She is a past prizewinner in the International Horn Competition of America and the Yamaha Young Performing Artists Program.

In recent seasons, Ms. Sterrett has made solo appearances at Carnegie Hall, with the New Haven Symphony Orchestra, and at the 2015 International Horn Symposium with her Philharmonic colleagues. She serves on the horn faculties of Rutgers University and New York University.