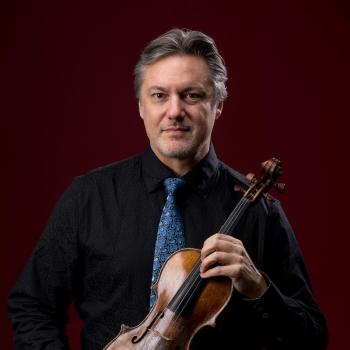 American violinist Kurt Nikkanen is an international soloist of the highest order. Born in Hartford, Connecticut, he began his violin studies at the age of three, later studying with Roman Totenberg and Jens Ellerman. At twelve he gave his Carnegie Hall debut, performing with the New York Youth Symphony; two years later he was invited by Zubin Mehta to perform the Paganini Concerto No.1 with the New York Philharmonic for a Young People's Concert. He studied with Dorothy DeLay at the Juilliard School.

Mr. Nikkanen regularly receives invitations from leading orchestras and presenters in the USA and Europe, and has toured Japan and the Far East.  He has worked with many of the world’s most renowned conductors, including Hirokami, Jarvi, Kreizberg, Fischer, Litton, and Nelsons. In North America he has appeared with the symphonies of Dallas, Saint Louis, and Detroit, the Minnesota Orchestra, San Francisco Symphony, Los Angeles Philharmonic and Cleveland Orchestra, and in Europe with the BBC Symphony, Royal Philharmonic, BBC Philharmonic, Deutsches Symphonie-Orchester Berlin, Rotterdam Philharmonic and the Dresden Staatskapelle. He has also appeared with the Belgian National Orchestra, Trondheim Symphony and the orchestra of RAI Turin, Orchestra of Galicia, the Bilbao Symphony, the Malaysian Philharmonic and the Swedish Chamber Orchestra. Nikkanen has given acclaimed performances of the Dvorak concerto with the Czech Philharmonic and Vladimir Ashkenazy, both in Prague and on tour in the USA, with concerts in New York and Chicago.

With the National Chamber Orchestra of Washington conducted by Piotr Gajewski, Kurt Nikkanen recorded Steven R. Gerber's violin concerto, which was written expressly for him, for Koch International. Mr. Nikkanen performed the world premiere of Mikko Heinio’s Concerto Alla Madre, subsequently recording it for Sony Classical with the Turku Philharmonic under Petri Sakari and released to great acclaim in 2010. His recording of William Walton's Violin Concerto with the New Haven Symphony was released on the Nimbus Alliance label, and was a Gramophone Magazine Critic’s Choice selection for 2010.

In May 2010, Nikkanen gave the New York premiere of the Violin Concerto by Thomas Adès, with the New York City Ballet Orchestra, (of which he is also the concertmaster) earning praise for his ‘brilliant’ performance from the New York Times.

Highlights of the Fall season will include performances of Mozart’s Sinfonia Concertante with the Mid-Atlantic Symphony, and a residency in Shanghai, China with the New York City Ballet featuring performances of the Stravinsky Violin Concerto. In 2019, Mr. Nikkanen will record the complete Beethoven String Trios with cellist Zuill Bailey and violist Scott Rawls to celebrate the upcoming 250th anniversary of the composer’s birth.