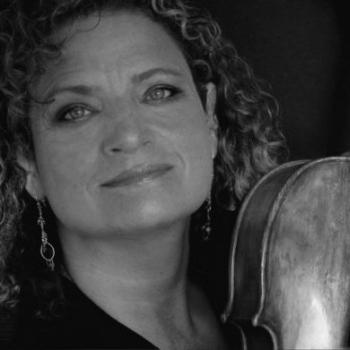 Karen Ritscher, praised by the New York Times for her “superior musicianship”, is recognized internationally as a leading pedagogue, soloist and chamber musician. She has also served as principal violist of the Houston Grand Opera, the Dallas Opera, American Composers Orchestra and the Brooklyn Philharmonic. She has taught at many of the leading conservatories of the United States and her students hold prestigious posts in major orchestras, string quartets, and at universities throughout the world. She is on the viola faculty at the Manhattan School of Music, New York University, Boston University, and City University of New York. She has judged many international competitions, most recently the Primrose, in June of 2011. As a master class clinician and recitalist, she has appeared throughout the United States as well as Canada, Mexico, Spain, Czech Republic, Korea, Taiwan, and China. Her summer residencies have included the Aspen Music Festival, the Heifetz International Institute of Music, Litomisl International Masterclasses in the Czech Republic, and Domaine-Forget in Canada. Since its inception in 2002, she has served on the faculty of the annual “Karen Tuttle Coordination Workshop.”

Ms. Ritscher performs and records with the Azure Ensemble, a new music chamber group based in NYC. She has been a member of the Aureus Piano Quartet, Steve Reich Musicians, and St. Luke’s Chamber Ensemble. She has toured and recorded with Orpheus Chamber Orchestra, St. Louis Symphony, New York Philharmonic, and the Houston Symphony.

Ms. Ritscher is honored to have been the string consultant for the award-winning  book by Madeline Bruser, The Art of Practicing; a Guide to Making Music from the Heart. She is the Education Editor of the Journal of the American Viola Society and a frequent contributor to string magazines.

In the spring of 2011, Ms. Ritscher became a certified teacher of Gabrielle Roth’s 5Rhythm™ Movement Practice. She teaches Rhythms™ in Boston and New York, as well as workshops throughout the world. www.karenritscher.com