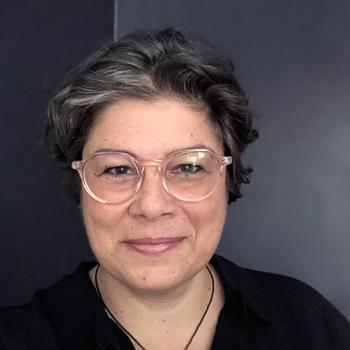 Helga works on issues to do with technology, media, culture, territory and politics in the Middle East, with a particular focus on Palestine-Israel. Her work seeks to challenge the notion of an open and borderless world by looking at how technologies and their infrastructures -- such as cell phones and the internet -- impose new forms of borders and controls and work in explicitly territorial and political ways. She is equally interested in thinking about how spaces and 'things' that are overtly territorial and political -- borders, checkpoints, and identification cards, for example -- themselves function in cultural ways.

Helga has published a wide range of peer-reviewed articles and invited chapters. She is co-editor of the 2016 book Gaza as Metaphor and is currently working on another volume on new Palestinian visual spaces. She has researched and written on Arab media; Palestinian cinema, television, video games and popular culture; telecommunications and internet infrastructure and development in the Palestinian Territories; cultural/territorial politics, checkpoints, identification cards, and surveillance in Palestine-Israel; as well as other topics.

Most recently, Helga has been experimenting with visual forms of expression and especially collage.

Helga teaches courses at undergraduate and graduate levels on topics including borders and spatiality, Arab media, critical theory and media studies, Israel/Palestine, war and media, globalization and international development, public humanities, Middle Eastern cities and urban spaces, and what has been referred to as "the coffee class" (cultural geography of commodities), which is not always about coffee.

Before academia, Helga worked as a researcher and strategic analyst at a multinational media conglomerate and as an internet consultant. She has lived in various parts of North America, Europe, and the Middle East, which has resulted in border-crossings of various kinds, an obsession with im/mobility, and the ability to fluently communicate in six and a half languages. Helga has spent lots of time behind a camera, as a photographer and documentary film-maker.

This course will investigate the cultural geography of a specific commodity, assessing historical & contemporary issues that inform modes of production & development of international or domestic trade. The subtopic may vary. Students will work as a team to produce a project that analyzes the intricacies of the commodity-in this case, coffee. The course will include on-the-ground research and site visits.

Examines theoretical approaches that are central to the study of media, culture, and communication. provides students with a historical and critical framework for understanding the literature and research traditions within the field of media studies with an emphasis on media and communication as institutional actors, technological artifacts, systems of representation and meaningful cultural objects.

Examines developments of culture, politics, and media in contemporary Middle East through an historical and cultural lens. Course is organized by theoretical theme and geographic location and addresses culture as a site of struggle; the impact of globatlization on Arab mass media; the connections between civil society, demoracy and Islam; and gender, national and diasporic identities.