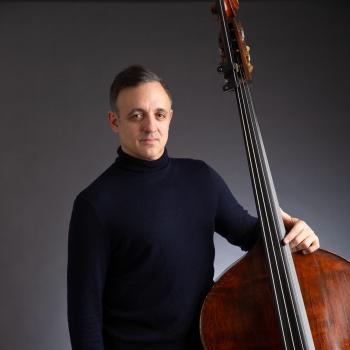 Bassist and composer Gregg August spans the classical, avant-garde, jazz and Latin jazz worlds making him one of the most versatile musicians on the scene today. He is member of the Orpheus Chamber Orchestra (Associate) as well as the American Composers Orchestra, Westchester Philharmonic and Orchestra of St. Luke’s. Gregg is also the former Principal Bass of La Orquestra Ciutat de Barcelona and the Brooklyn Philharmonic.

As a jazz bassist Gregg is a member of the JD Allen Trio, having recorded 9 albums with the group, as well as Arturo O’farrill’s Afro-Latin Jazz Orchestra, with whom he’s won 5 Grammy awards. In 2003 Gregg formed his own record label, Iacuessa Records, for which he has recorded three critically acclaimed albums of entirely his own original music: Four by Six ( 2012), One Peace (2007) and Late August (Iacuessa Records 2005).

In August of 2020 Gregg will release Dialogues on Race (Iacuessa Records), the result of a commission from the Jazz Gallery and Jerome Foundation. An extended suite for a 12 piece large jazz ensemble, plus 3 vocalists, strings and narrator, the extended work deals with the subject of race relations in the United States. He utilizes poems by Maya Angelou, Langston Hughes, Marilyn Nelson and others to create a musical conversation that is intended to help bring awareness and foster understanding on the issue of race.

Gregg has also composed many full length concert works, including “Una Rumba Sinfonica,” a commission from the Jazz Composers Orchestra Institute and Earshot, which was premiered by the Buffalo Philharmonic. He has performed and/or recorded with The New York Philharmonic, Steve Reich, The Bang on a Can All Stars, Alarm Will Sound, as well as Ornette Coleman, Chick Corea, Branford Marsalis and Ray Barretto. Gregg was on the Downbeat Magazine Critics’ Rising Star Poll in 2017, 2015 and 2013.

An adjunct professor at New York University and the University of Connecticut,  Gregg has also been on faculty at the Bang on a Can Summer Music Festival at MASS MoCA (North Adams, MA) since 2003.

Gregg received his bachelor’s degree from the Eastman School of Music and his master’s from the Juilliard School.