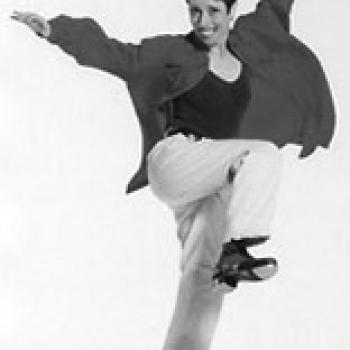 Germaine Salsberg is one of the most popular and influential tap dance teachers in New York today. She has been on the faculty of Broadway Dance Center for over 15 years, wher e she teaches a complete tap program of basic to intermediate levels. Her students include cast members from Broadway and Off-Broadway shows, National tours, the Rockettes, tap companies, Broadway choreographers, as well as people who “just love to tap.”

She has taught Musical Theatre Major students at Cap 21 in New York and currently teaches Music and Musical Theater Majors from the Music Theater Studies Program at NYU’s Steinhardt School of Culture, Education, and Human Development.

She has privately coached stars from the New York City Ballet and many actors and actresses including Liza Minelli for the movie Steppin Out. She is a frequent guest teacher throughout the U.S. and Canada; has taught workshops and choreography in Mexico, Brazil, Finland, Austria, and Germany; and has taught for every major dance organization including DMA, DEA, Dance Olympus, PDTA, NAADA, and many private organizations and schools.

As assistant to Tony Award Winner Danny Daniels, she helped train the boys for the Broadway and Nation al tours of Tap Dance Kid. Besides her own concert work, Germaine has choreographed productions of George M! for the Mount Washington Valley Playhouse and 42nd Street (1996), Anything Goes (1998), Crazy For You (2001), and Dames At Sea (2002) for the Muhlenberg Summer Theater in Pennsylvania. She is presently working on a new show (in development), which is an all women’s tap show with contemporary rock music and which had its first showcase in February 1999. She taught and performed at the Edmonton Fringe Festival and the New York City International Tap Festival in 2001 and 2003.

Prior to teaching, Germaine began her career as an actress, appearing on radio and television in her native Canada. She became a founding member and soloist with the Toronto Dance Theatre and performed and toured with that company for 7 years, appearing in Canada, the U.S., and Europe. In New York she and her husband co-direct A & G Dance. They have produced concerts for the Riverside Dance Festival, DTW’s Bessie Schoenberg Theater, New York University, and various school programs including Lincoln Center’s Meet-the-Artist and Hospital Audiences. They have performed together in Canada and Europe. Most recently they were part of the Soho Arts Festival in New York City, and created and performed in a very successful show entitled Not Fade Away: Dancing Over 40, which was premiered in New York in 1996 and performed in Pennsylvania in July 1997 and 1998. They completed a new performance series of the Not Fade Away Project, which was presented at the Merce Cunningham Studio Theater in November 1998 to sold-out houses.

"Germaine is a wonderful teacher. She is filled with imagination and great fun to work with. I enjoy every minute I spend with her in a dance studio." Liza Minelli