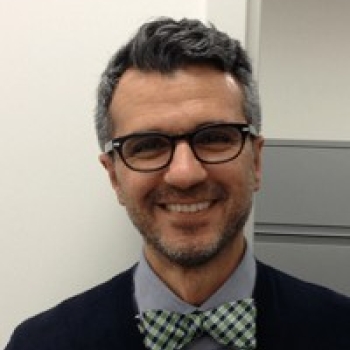 Domingo J. Piñero joined the faculty of the Department of Nutrition, Food Studies, and Public Health in August 2002 and became director of the undergraduate program in 2008. He received his B.S. in Nutrition in 1986 from the Universidad Central de Venezuela; an M.S. in Nutrition in 1991 from the Universidad Simón Bolívar, Venezuela; and his Ph.D. in Nutrition with a minor in Demography in 1998 from The Pennsylvania State University. From 1998-2002 he was a Research Assistant Professor at the G.M. Leader Family Laboratory for Alzheimer's Disease Research, in the Neuroscience Department of the Penn State College of Medicine.

Dr. Piñero’s research interests are in pediatric nutrition in Latinos; especially pediatric obesity, and iron nutrition and cognitive development. He is most interested in multidisciplinary approaches to the solution of nutritional problems early in life. His current research centers on the prevention of child and adolescent obesity in the Latino community. Dr. Piñero earned a New York University Research Challenge Fund Award in 2004 for his pediatric obesity prevention collaborative research at Bellevue Hospital and was the recipient of the 2007 Teaching Excellence Award of the Steinhardt School of Culture, Education, and Human Development at New York University. Currently involved in interdisciplinary work in the BODY (Banishing Obesity and Diabetes in Children) project targeting obese children in NYC public schools.

Introduction to Global Issues in Nutrition

Introduction to world food problems and their nutritional, economic, and social effects.