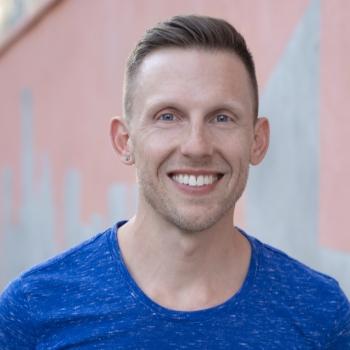 David J. Baldwin is an Adjunct Voice Instructor at NYU Steinhardt. He holds an Advanced Certificate in Vocal Pedagogy from NYU, a master’s in Performance Studies from Bowling Green State University, and a bachelor’s in Music Education from Taylor University.

He is also grateful to have performed with the The Metropolitan Opera Chorus (including the Grammy-Award-winning production of Wagner’s Ring Cycle), The American Symphony Orchestra, Opera on Tap, The Bard Festival Chorale, Church of the Transfiguration, St. Vincent Ferrer, and Soho Synagogue.

David is a frequent music director at NYC’s historic Duplex Cabaret Theater, appearing with veterans of Broadway and The Metropolitan Opera. When he’s not singing or teaching, David enjoys training for marathons, playing volleyball in the Gotham Volleyball League, and working out with his wacky friends at Mark Fisher Fitness. David was a winner of Mark Fisher Fitness’ Snatched Before/After competition, and is an active MFF Ninja, leading the book club, and the Unicorn Glories LGBT social club.