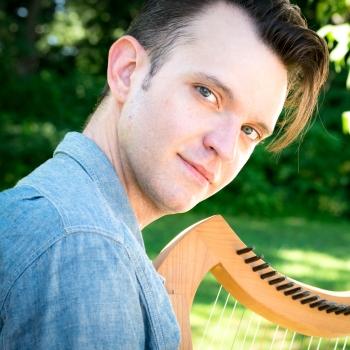 Christopher Preston Thompson is a New York City-based tenor, historical harpist, and musicologist focused on early and new music. He has performed as a soloist in venues throughout the United States, including NYC's Carnegie Hall and Merkin Hall, and has served as music consultant, composer, arranger, and/or coach for companies such as The Great River Shakespeare Festival, Red Bull Theater, Playhouse on Park, and Tabula Rasa Dance Theater, among others. He is the founding artistic director of Concordian Dawn, ensemble for medieval music, and a regular member of Grammy-nominated ensemble for Renaissance polyphony, Pomerium. In 2019 he was honored to perform a solo concert for the Medieval Academy of America’s national conference. Christopher is a candidate for PhD in Performance Informed Musicology at the Graduate Center, City University of New York, and was a 2018 National Endowment for the Humanities Summer Scholar. He has given presentations and led workshops on medieval vocal and instrumental repertoire and performance practice for institutions such as Princeton University, NYU, the University of Pennsylvania, the Historical Harp Society, and the Modern Language Association. Recent publications and recordings include “Pizza, Opera, and Hybridity” in the edited collection Pizza is God (Düsseldorf: NRW-Forum, 2018), Musical Games, Riddles, and Puzzles of the Renaissance with Pomerium (Old Hall Recordings, 2019), Missa Tu Es Petrus with the Chamber Choir of St. Luke in the Fields (MSR Classics, 2018), and review articles for the Bulletin of the Historical Harp Society (vol. 28, no. 1, 2019) and Comitatus (vol. 51, 2020). Christopher’s current projects include, most notably, a collaboration with Sarah Kay in conjunction with her forthcoming book, Medieval Song from Aristotle to Opera (Cornell University Press and MSR Classics, 2022), Concordian Dawn’s debut studio album, Fortuna Antiqua et Ultra (MSR Classics, 2021), and a solo album, entitled Truth, Deception, and Transcendent Love (MSR Classics, 2023).