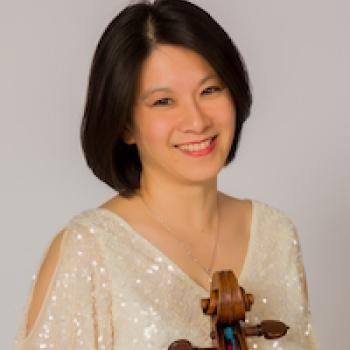 A versatile artist, cellist Carol Ou is known for her “fiery, marvelous” and “meltingly melodic outpourings” (Boston Globe). As the cellist of the Carpe Diem String Quartet and the Buswell-Ou Duo, she frequently tours all over the US performing a zesty mix of classical, contemporary and crossover repertoire. Solo recitals and other collaborations have been with celebrated performers James Buswell, Hillary Hahn, Kim Kashkashian, Timothy Eddy, Pascal Rogé, and Robert Levin at the Marlboro Music Festival, Summerfest La Jolla, Australian Festival of Chamber Music, Nevada Chamber Music Festival, and other noted music festivals.

At ease with the diverse musical styles of the last five centuries, Ou regularly programs traditional European masterworks with more eclectic works in concert. She has recorded three of the most beloved cello concerti by Haydn, Tchaikovsky, and Elgar and premiered several new compositions written for her. American composers such as Richard Toensing and Daniel Pinkham have dedicated works to her. Other unusual works that she has performed include Tan Dun's Ghost Opera for string quartet and pipa, Peter Sculthorpe's string quartet with didjeridu, and Reza Vali’s Calligraphy no. 4 for string quartet and the Persian santoor.

A graduate of Yale University, Ms. Ou received her BA magna cum laude from Yale College and her MM and DMA in music performance from the Yale School of Music. She has taught cello students at Yale and MIT, and was the director of strings, chamber music, and orchestral studies at Gordon College. Between 2006-2013, she was also the director of chamber music at the Heifetz International Music Institute in Wolfeboro, NH, and Staunton, VA. She is currently on the cello faculty at the NYU Steinhardt and also teaches at the New England Conservatory of Music in Boston, where she is also the assistant chair of strings at the conservatory’s School of Continuing Education. In addition to her regular teaching duties, Ms. Ou travels internationally to give cello and chamber music master classes on five continents, most recently in Hong Kong, Turkey, and Italy.