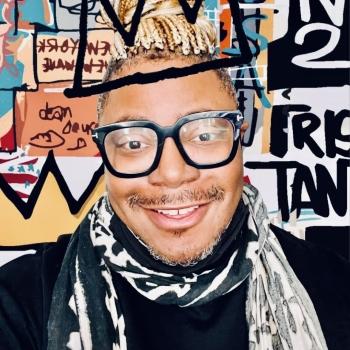 Adam D-F. Stevens (they|them), MA, RDT. They are a Registered Drama Therapist (RDT) who works at the Hetrick-Martin Institute, a non-profit organization that serves LGBTQAI+ youth in NYC. Their role includes supporting queer youth in transforming their loss and grief into unapologetic, abundant joy and empowerment. Previously, Adam worked at the Cooke School & Institute, NYC, guiding young people with developmental and intellectual differences. They are alumni of Marymount Manhattan College and New York University where their areas of study included Theatre Arts and Drama Therapy respectively. Adam serves as an adjunct faculty member in the Creative Arts Therapy Programs at Antioch University in Seattle, and New York University and Marymount Manhattan College in NYC. They have sat on the Board of Directors for the North American Drama Therapy Association (NADTA) as Chair of the Cultural Humility, Equity, and Diversity Committee. Adam is a political and social justice theatre practitioner who has performed, directed, and choreographed throughout North America. In 2020, they were named Artistic Director for the Collideoscope Repertory Theatre Company (CRTC) whose mission is to advance racial justice and healing through artful affinity and performance. Adam works as a diversity, equity, and inclusion specialist supporting organizations and schools worldwide. In 2021, they were invited to be Drama Therapist-in-Residence with the John F. Kennedy Center for the Performing Arts in Washington, D.C. Adam has more recently connected with several Off-Broadway and university theatre companies as an actor’s advocate and emotional wellness consultant. Inspired by Robert Landy’s Role Method and Role Theory in drama therapy, Adam has presented on and is developing the Black American Role Taxonomy, or BART, offering space for Black clients to reclaim racialized roles and deconstruct stereotypes appropriated by privileged others. Adam's superpowers are rooted in the fantastical forces of creativity and love.