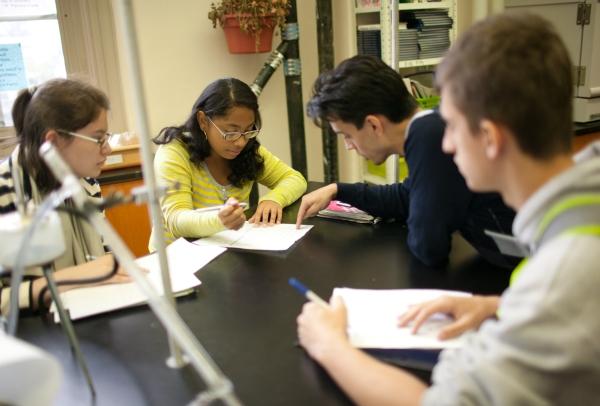 Introduction
The purpose of our study is to gain an understanding of student motivation in the mathematics classroom. We focused specifically on student participation in the classroom and its effect on classroom performance. We are interested in this particular topic because we have taught middle school students in New York City for the past four years. In our experience we have seen common trends in the classroom, particularly with the relationship between classroom participation and student performance. Classroom experience has demonstrated that the students who contribute to mathematical discussions tend to succeed academically. At the start of the academic year, we observed that the majority of our sixth graders did not voluntarily participate in classroom discussion. A number of factors could have contributed to this behavior, such as being in a new school environment, adolescent shyness, lack of content knowledge, fear of embarrassment, or language difficulty. Our intention was to critically analyze the variables that affect student involvement, and use these discoveries to motivate students to participate in mathematical dialogue. We hope to see a direct correlation between rates of student participation and overall academic achievement.

Action Research Question
We teach students by giving them the opportunity to ask their own questions, guide discussions and let them enlighten us of their needs (Bissex, 1996). The focus of our study is to increase student involvement and create a child-centered learning environment that will enhance students' critical thinking and mathematical ability. A study conducted by Berquest and Phillips (1975) concluded that three factors contribute to student non-involvement. "One-way communication on the part of the instructor, certain student learning styles which avoid involvement, and the lack of specific classroom structures which encourage participation." Additional research done by Turner and Meyer (2004) concluded that "a combination of challenging instruction and positive affective support is necessary for promoting motivation in mathematics classrooms." Another study conducted by Turner, J. and Patrick, H. (2004) examined work habits and classroom participation. They determined that "classroom participation is related to a combination of factors: math achievement, personal achievement, goals, perception of classroom goal structures, and teacher support." Lastly, Dallimore, Hertenstein and Platt (2004) revealed that increased classroom participation is influenced by "affective questioning, lessons relevant to their daily lives, supportive classroom environment, and a constructive feedback participation grade."

Based on these research findings, we examined the correlation between students' classroom contributions and academic success. Our hypothesis is that an increase in pupil participation rates will lead to an improvement in academic performance.

Research Design Methods
The background for our research stems from a large middle school in the Washington Heights area of New York City. Our focus group consisted of 6 general education students of Hispanic origin, whose L1 is Spanish. Two of the students are performing above grade level and contribute frequently in classroom discussion. We also selected two students who are approaching grade level mathematical standards and who have limited participation rates. Lastly we chose two students who were performing below grade level standards.

Before testing our hypothesis, we distributed a survey (Appendix A) to 120 students that asked them to indicate what factors inhibited their participation, their opinions of themselves as math students, and what would encourage them to be actively involved in their learning environment. The survey was both quantitative and qualitative, and included Likert scale questions, multiple choice questions, and open-ended/free-response questions. In the open-ended survey section, the students were given the opportunity to share their suggestions on how to increase student involvement and participation during in-class instructional time. Student responses were analyzed and used in the creation of our action research design.

After conducting the student surveys, we had a whole class discussion regarding the importance of classroom participation. During our discourse, we explained to our classes that classroom participation would account for 20% of their marking period grade. In order to monitor and assess student rates of participation, we designed a graphic organizer to track the frequency of pupil involvement, and tally the number of oral responses given by the learner.

Our research design included a reward system which consisted of a raffle. Students were given one raffle ticket for every 5 tallies for classroom involvement. These raffle tickets were used to determine participants for a weekly honor's lunch program. Through this incentive, students had an opportunity to spend one lunch period playing board games and socializing with their peers in a fun and informal setting. Another aspect of the reward system is to recognize the students who participate most often. At the end of each instructional block, we publicly acknowledged the top 5 participants of that day. At the end of the school year, we plan to celebrate student improvement in participation and performance through a formal award ceremony.

Our pedagogical practices were modified to promote learning environments where students were actively engaged in the lesson. We utilized higher-ordered questions, based on Bloom's Taxonomy, that required students to analyze and synthesize mathematical concepts and problems. In our questioning, we made sure to ask students to support their answers and explain their thinking. We also incorporated tactile manipulatives into our collaborative work assignments, and increased the number of fun, educational activities.

Data Analysis/Findings
Using the information from the survey, we noticed that the most frequent response students reported for not participating in class was fear of embarrassment. This sentiment relates directly to adolescent development and the precedence of peer influence in their lives.

Another apparent trend that the pupils described was the effect of their personal content knowledge on their participation rates. When students were exposed to mathematical topics that they could relate to, they were more willing to engage in classroom discussion.

Our implementation of the research design was incorporated into a mathematical unit on integers. We collected a baseline measure of the student participation rates before we explained the tracking and reward system. Using this data and the student city-wide test scores, we selected our focus group of 6 students. There appeared to be a trend between low-level achievement and non-involvement. For example, in a given teaching period, one low-level student participated three times, while the high-level achiever had more than twice this amount of involvement.

After a week of implementing our research study, we observed a noticeable improvement in overall class participation. All students, regardless of their performance level in class, were raising their hands more frequently and willing to share their responses to the particular task at hand. For example, one low-level student who raised his hand less than three times on average prior to our study was raising his hand about 10-15 times at the end of our research project. All students appeared to want to be more involved in the learning environment.

The use of the participation tracker and reward system offered a motivational tool for students to increase their involvement in class discussion. We believe that the students recognized that being involved in class would earn a raffle ticket and that the more they participated the more tickets they would get. The students were very excited about participating in honors lunch, and knew that having more raffle tickets increased the probability that they would be chosen for this event. It appeared that the initial reservations, such as fear of embarrassment and lack of content knowledge, were less influential when the students were provided with an incentive. As a result, academic gains were made by many students.
The increase in participation correlated with an improvement in classroom performance. After teaching a period, we administered a quiz on that material and we observed that the student with the highest participation rate also earned the highest score on this assessment. In our focus group there was a noticeable improvement on assessments for the low-performing and average students whose participation rates increased. One low-performing student earned an 87% on an assessment on the multiplication of integers. On another assessment, the entire class average increased by 12%. Remarkably, all but one student scored above 65%, and 13 students out of 30 received perfect scores.

Conclusion
The influences of the reward system motivated students to stay focused and disregard many inhibitions about classroom participation. In addition, due to the fact that students were rewarded for their participation and not for providing correct answers, they seemed to recognize a reward for effort.
While our data appears to indicate an improvement in classroom performance based on the increased rate of student participation, there are some areas that need to be improved with our research design. For example, prior the implementation of our design, we should have used a diagnostic exam to assess student understanding of integers. This would have provided us with a clearer picture of the academic gains with regard to the topic of integers.

Another change to the study could have been to monitor the participation rates for a longer time period. This would have given us a clearer assessment of the student involvement. Also, we should have considered monitoring the participation rates prior to the implementation of the reward system. This would have enabled us to isolate the effect of the reward system from the effect of the pedagogical changes, such as our questioning, use of manipulatives, and types of instructional tasks.
Overall, the implications of our study offered great insight into improving student achievement. It would appear that the combination of pedagogical practices, reward systems, and student support created a child-centered learning environment in our classrooms. As a result of our findings, we plan to continue the use of the participation tracking system, raffle tickets, and the honors lunch reward period.

Turner and Meyer. 2004. A Classroom Perspective on the Principle of Moderate Challenge in Mathematics.Journal of Educational Research 97(6): p.331. Jul 2004.