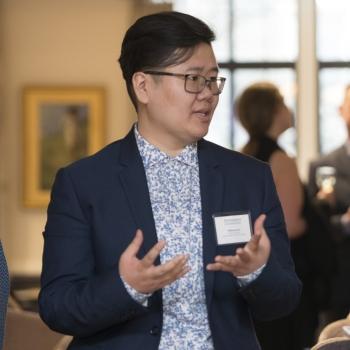 Whitney (Whit) Pow (they/them) is an Assistant Professor in the Department of Media, Culture, and Communication. They received their MA and Ph.D. in Screen Cultures in the Department of Radio, Television, and Film from Northwestern University, and their BA in English Language and Literature, History of Art, and Global Media Studies from the University of Michigan.

Pow is a media historian whose research focuses on transgender histories of video games, software, and computational media. They write about the everyday, and at times invisible, circulation of power within and around digital and interactive media, and the ways that trans programmers and video game designers have been imagining resistive futures and possibilities for computational media from the 1970s to today. Their current book project locates trans video game designers and programmers in histories of early software and hardware development, looking at the intersection of queer and trans medical history, surveillance, and policy with computer and video game history.

Pow’s work has been published in the Feminist Media Histories, Journal of Cinema and Media Studies, ROMchip: A Journal of Game Histories, The Velvet Light Trap, and the Oxford University Press reader Gendered Lives, Intersectional Perspectives, edited by Gwyn Kirk and Margo Okazawa-Rey. Their most recent interactive art piece, Digital TV Breakfast, was exhibited at Ars Electronica as a part of the art exhibition Chicago New Media 1973-1992.