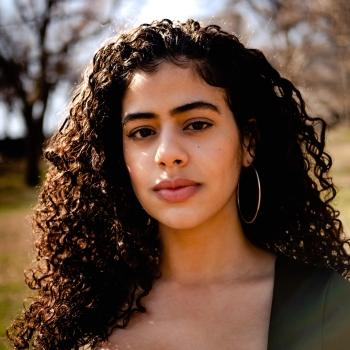 Tiffany C. Martínez is a Dominican-American sociologist from New York City and Miami. Martínez is currently in her first year of the Teaching & Learning PhD program with a concentration in Urban Communities. Martínez is a Ronald E. McNair Scholar and holds a BA from Suffolk University and an MA from Columbia University. In both institutions, her studies centered around the ways our United States public school system can do better to affirm, uplift, and serve our youth from marginalized backgrounds. In her academic and professional trajectory, Martínez works to cultivate a bridge between theory and practice; pairing her research around race, ethnicity, gender, language learning, and belonging with on-the-ground service.

She’s worked among nonprofits and public schools in Boston and New York City to center inclusivity and produce/facilitate curricula that recognizes the whole child while being reflective of the various learning styles/cultures of the students present. In all of Martinez’s work, she maintains a philosophy where education should be inclusive, multilingual and representative of the young people in their classrooms. Martínez is passionate about youth advocacy, anti-racist pedagogy, translanguaging, reimagining power in the classroom, and cultivating spaces where each person feels heard, valued, and taken care of. She also loves painting, a good cup of coffee, a brisk morning run, a plate of mangú, & Tetris.