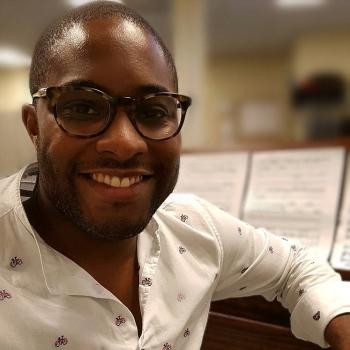 Born and raised in St. Louis, Missouri, Ronald Robinson has studied orchestral conducting, choral conducting, and composition here in the States and in Europe. His degrees are in orchestral conducting and horn performance from Webster University (Missouri). He's had the opportunity to travel to Florence, Italy, for additional studies in orchestral conducting and Vienna, Austria, for additional studies in philosophy of music, horn, piano, and orchestral conducting. While in Vienna, he performed regularly as a soloist on horn and traveled with the Vienna Horn Society. He also performed regularly as a pianist and an accompanist for vocalists and instrumentalists. An accomplished pianist, Professor Robinson is fluent in jazz and classical styles. He has held the position as music director for various theatres (professional, community, and youth) throughout St. Louis, Missouri. He has also conducted chamber orchestras throughout Italy, performing mostly his own compositions along with the standard repertoire. As a music director and accompanist, Professor Robinson formed his own gospel choir that performed as a featured choir throughout the church community in St. Louis. He also formed a piano trio and other chamber groups to perform arrangements of his compositions. While building a music program and teaching various music classes at Crossroads College Preparatory School, Professor Robinson has built music programs throughout St. Louis, working with K-12 private schools and universities. As a freelance composer, he has composed for Green United Music’s catalog for film directors, editors, and producers in Paris, France, and has produced two albums with a third on the way. You can find his album Nostalgia on all the streaming platforms. Compositions from Ron's new album, ROMA|AMOR, had their first public appearance with his piano trio at André Hueston Mack's (African American sommelier, winemaker, and author) book signing and wine tasting tour in St. Louis, October 2019. Former Director of Music at Fontbonne University, Professor Robinson came east to New York City at the request of Bay Ridge Prep in Brooklyn to help build their music program.