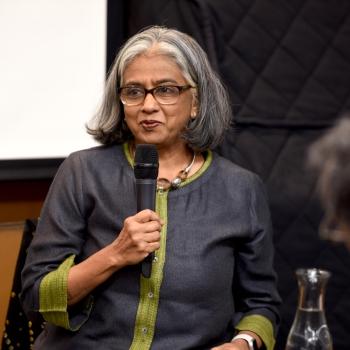 Radha Sarma Hegde is Professor in the Department of Media, Culture and Communication at New York University. Her research and teaching focus on migration, media flows, globalization and transnational feminism. She is the author of Mediating Migration, (Polity 2016) editor of Circuits of Visibility: Gender and Transnational Media Cultures (NYU Press, 2011) and co-editor of Routledge Handbook of the Indian Diaspora (2018). Her earlier work on gender identities and reproductive politics in south India include ethnographies conducted in south India on the subject of violence and motherhood. Her work has appeared in journals such as Communication Theory, Critical Studies in Media Communication, Feminist Media Studies, Violence against Women, Global Media and Communication. Radha serves on the editorial board of several major journals in the field of media and cultural studies. She has served as co-editor of the journal Feminist Media Studies.

The course examines the role of media in the lives and cultures of transnational immigrant communities. Using a comparative framework and readings drawn from interdisciplinary sources, the course explores how media practices and media representations define and enable new conceptions and practices of national belonging, identity and culture in the context of global migration.

Migration, Media, and The Global City

This course examines migration, mobility and the role of media and technology in redefining cultural borders and citizenship. We will discuss how the presence and representation of migrants and immigration reconfigure visions of national belonging. How are migrants imagined and surveilled in global urban contexts? How do media and technology enable the (re)imagining of transnational communities and cultural politics? Through discussions and lectures, students will engage with changing urban landscapes and emerging networks of migration.