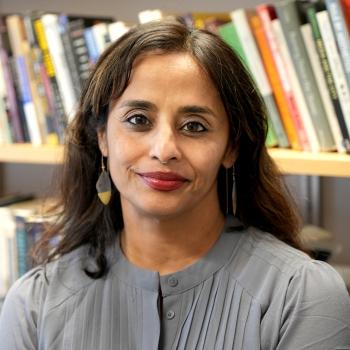 Associate Professor of Media, Culture, and Communication (Steinhardt and Gallatin)

Paula Chakravartty’s interests focus on global media and politics. Her research and teaching interests span comparative political economy of media industries, postcolonial and critical race theory, and social movements and global governance. Her recent publications include a special issue on “Infrastructures of Empire: towards a critical geopolitics of media and information studies,” for Media, Culture and Society (2016).

She is the co-editor of Race, Empire and the Crisis of the Subprime (with Denise Ferreira da Silva, Johns Hopkins Press, 2013), the co-author of Media Policy and Globalization (with Katharine Sarikakis, University of Edinburgh Press and Palgrave, 2006), and co-editor of Global Communications: Towards a Transcultural Political Economy (with Yuezhi Zhao, Rowman & Littlefield, 2008). Her writings have been published in a number of journals, including American Quarterly, International Journal of Communication, Media Culture and Society and Political Communication. Her current research includes a project on new frontiers of labor and migration in India and an on-going research in the area of digital media and the new political, through her involvement in the Inter-Asia research network of the Social Science Research Council (SSRC).

She is on the Steering Committee of South Asia at NYU and is Affiliated Faculty at the Kevorkian Center of Near Eastern Studies. She is jointly appointed with the Gallatin School of Individualized Studies.