Pamela Fraser-Abder graduated from the University of the West Indies with a BSc in Botany, Zoology, and Chemistry. She then taught Science and Spanish at the secondary level in Trinidad. Upon completion of her M Ed and PhD both in science education/psychology and a post-doctorate in Human Resources and Education Planning at Pennsylvania State University, Pamela returned to the University of the West Indies as a Senior Lecturer. She developed the primary science curriculum for Trinidad and Tobago, while designing and implementing a model for science teacher education, which became the subject of seven books and numerous journal articles. In 1989, she joined the faculty at New York University (NYU), where she is currently the Director of Science Education. Pamela is recognized both nationally and internationally for her expertise on the impact of gender and cultural issues on the teaching and learning of science. She served as a Consultant in Primary Science Teacher Education for UNESCO and the Commonwealth Secretariat, conducting workshops in England, France, Latin America, and the Caribbean. Dr. Fraser-Abder served as a gender expert consultant to the United Nations Gender Working group to formulate plans to stimulate action and research for a more equitable world through science and technology. As part of her contribution, she co-authored a chapter that formed the basis of UN recommendations on the inclusion of women in Science and Technology. As the current President of the Board of Directors of the International Women's Tribune Center, an NGO, whose main role is to foster global gender equity in Science and Technology, and a Fellow at the Radcliffe Public Policy Institute, she has focused on global policy issues that affect women in science. For the past decade she has worked with over 600 graduate students on issues of gender and culture in the urban science classroom in New York City. She directs several programs that support female and minority in-service, uncertified math and science teachers as they complete a master's degree and certification requirements at NYU. Funding for these programs totaling over five million dollars have been received from organizations including: Goldman Sachs, Teacher Opportunity Corps, Dwight D. Eisenhower, Brookhaven National Laboratory, Met Life, Toshiba, NYNEX, Sterling Winthrop, and others. Dr. Fraser-Abder holds office and maintains membership in several national and international organizations that reflect her intense devotion to science education, and to empowering teachers to achieve the goal of scientific literacy for all. She has served on the JRST editorial board, SSMA publication committee, NSTA, NARST, and AETS committees. In 1985 she was a co-founder of the International Consortium for Research in Science/Mathematics Education, an organization that meets bi-annually in Latin American and Caribbean nations to share research and teaching strategies with local educators. She has written over 20 books, 50 chapters and articles, and has been an invited speaker and consultant on science education, curriculum development, and gender and cultural equity in science to many national and international organizations. Her most recent book, Professional Development of Science Teachers: Local Insights with Lessons for the Global Community,published by Routledge Falmer, explores global social and cultural issues in science teaching and teacher preparation, and shows how these societies respond to the worldwide demand to achieve scientific literacy for all.

Dr. Fraser-Abder has recently conducted a comprehensive assessment of the national Mexican Elementary and Secondary science and mathematics textbooks and curriculum for the Mexican Ministry of Education. This curriculum serves 32.3 million students and over 700,000 teachers.

Fraser-Abder is the principal investigator of a three-year, $2.1 million grant from the New York State Education Department’s "Race to the Top" Fund.

The grant supports teacher preparation and retention in the sciences.

Dr. Fraser-Abder is coordinating Steinhardt School’s involvement in the 100K in 10 initiative, a multi-sector mobilization that responds to the national imperative to train 100,000 excellent science, technology, engineering, and mathematics (STEM) teachers over a 10-year period. 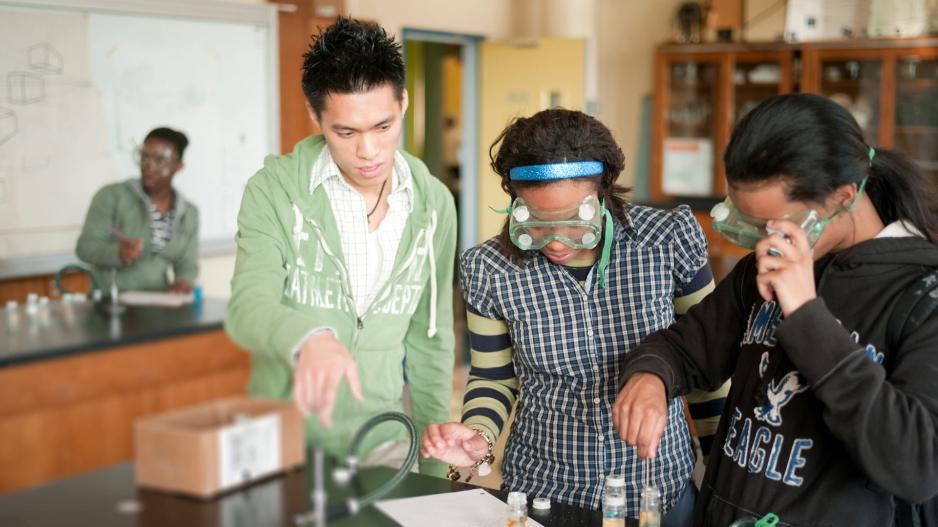 Become an effective science educator and leader in schools and nonprofits, and turn your passion for science into a career that makes a difference.

This course examines several models for teaching preschool and elementary science. Science experiences for elementary students are developed, and strategies for implementation and evaluation are devised.