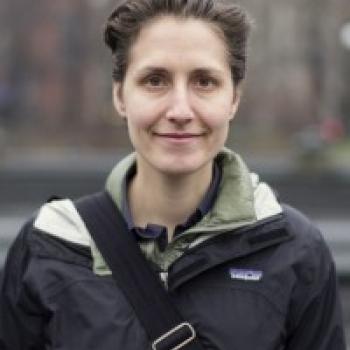 Nicole Starosielski’s research focuses on the global distribution of digital media, and the relationship between technology, society, and the aquatic environment. Her book, The Undersea Network, examines the cultural and environmental dimensions of transoceanic cable systems, beginning with the telegraph cables that formed the first global communications network and extending to the fiber-optic infrastructure that carries almost international Internet traffic. Starosielski has published essays on how Fiji’s video stores serve as a nexus of digital media access (Media Fields Journal), on Guam’s critical role in transpacific digital exchange (Amerasia), on the cultural imbrications of cable systems in Hawaii and California (Journal of Visual Culture), and photo essays on undersea cables (Octopus and Media-N). Before coming to NYU, she taught at Miami University of Ohio. She received her Ph.D. from UC-Santa Barbara.

Questions about the Media, Culture, and Communication undergraduate program should be sent to mcc.dus@nyu.edu.

Media and the Environment

This course will investigate the dominant critical perspectives that have
contributed to the development of Environmental Communication as a field of
study. This course explores the premise that the way we communicate
powerfully impacts our perceptions of the "natural" world, and that these
perceptions shape the way we define our relationships to and within nature.
The goal of this course is to access various conceptual frameworks for
addressing questions about the relationship between the environment,
culture and communication. Students will explore topics such as nature/
wildlife tourism, consumerism, representations of the environment in
popular culture and environmental activism.

This seminar will introduce students to the range of recent materialist research, while at the same time maintaining a skepticism about claims of the "newness" of this approach & the coherence or unity of the "material turn" in social theory. While including materialist media theory, the course will also focus on the elemental aspects of digital media - from codes & circuits to power generation & storage - in order to assess the usefulness of materialist & infrastructural analytics for understanding contemporary media systems.