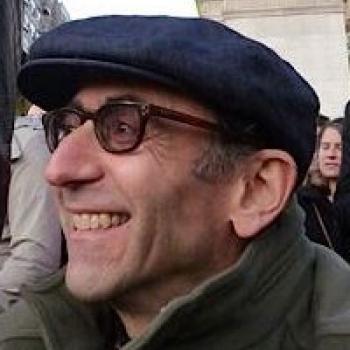 Nicholas Mirzoeff is a visual activist, working at the intersection of politics and global/digital visual culture.

In 2017 his book The Appearance of Black Lives Matter was published as a free e-book by NAME Publications and then in 2018 it came out as a limited edition hard-cover with a graphic essay by Carl Pope and a poem by Karen Pope (sold out).

In 2020-21 he is Mellon-ACLS Scholars and Society Fellow in residence at the Magnum Foundation, New York City. In 2019 he was the Astor Visiting Lecturer at Oxford University.

His book How To See The World was published by Pelican in the UK (2015) and by Basic Books in the US (2016). It has been translated into ten languages and was a New Scientist Top Ten Book of the Year for 2015.

Mirzoeff is considered one of the founders of the academic discipline of visual culture in books like An Introduction to Visual Culture (1999/2009) and The Visual Culture Reader (1998/2002/2012).

His book The Right to Look: A Counterhistory of Visuality (2011) won the Anne Friedberg Award for Innovative Scholarship from the Society of Cinema and Media Studies in 2013.

Mirzoeff was Deputy Director of the International Association for Visual Culture from 2011-2016.

From 2013-17, he was Visiting Professor of Visual Culture at Middlesex University, London.

A frequent blogger and writer, his work has appeared in The Nation, Hyperallergic, Frieze, the New York Times, the Guardian, Time and The New Republic.