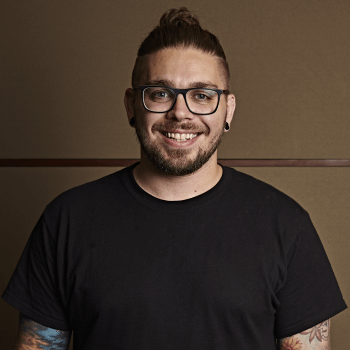 Matt Kulewicz is a recording/mixing engineer and producer for music and broadcast TV/film sound with 15+ years of experience wiring and running both live stage and recording studio environments.

His audio career started when he worked as a stagehand and assistant engineer at local live-music venues in the early 2000s around his hometown of Huntington, NY.  He attended SUNY Oneonta in upstate NY and earned a BA Honors in Music Business and Audio Production. In Spring 2008 he spent a semester abroad in Hultsfred, Sweden, where he worked for the then-largest open-air Swedish music festival, Hultsfredsfestivalen. After coming back to NY he toured as a live sound engineer, interned at The Cutting Room recording studios, and worked as an IT administrator.

In June of 2016, Matt earned his master’s degree in Music Technology at NYU Steinhardt, where his graduate thesis focused on 3D audio capture and 360 sound replication. Since then he has continued working for the program as an adjunct professor, department administrator, and academic advisor. Throughout his career, he has worked on numerous indie films, web series, and feature documentaries. Matt is an iZotope RX power-user who specializes in production dialogue, spatial-sound, and final broadcast mixing.

Starting in 2017 he has been the sound supervisor/mixer for Showtime’s Our Cartoon President which as of Fall 2020 is in production for season 3. Along with producing/mixing all original music for the cartoon, he has mixed/mastered the soundtrack for seasons 1-2 and is currently working on a new soundtrack for season 3. Since March of 2020, he has been consulting, designing, and running virtual recording studios for other animated productions in CBS and Warner Bros. Animation.