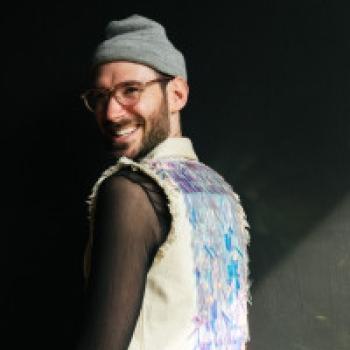 Kevin’s teaching interests include media studies methodologies, identity politics, disability theory, and media production. In 2015, he won the university-wide Penn Prize in Excellence in Graduate Teaching from the University of Pennsylvania.

In 2016 with Simi Linton, he co-founded the Disability/Arts/NYC (DANT), an activist organization that seeks to advance the aesthetics and artistry of disability in NYC. This work has been funded by the Mertz Gilmore Foundation and the Cultural Agenda Fund administered by The New York Community Trust. The activism can be seen reflected in the city’s first cultural plan, CreateNYC, and in public programming around the city, including “An Etiology of Omission” at The Whitney Museum in the fall of 2017.

Kevin’s artistic practice involves accessible video and audio production. His audio description has been published on OpenTV and his ongoing equitable DJ project includes scoring, mixing, and live performance with several artist-collaborators. He is currently the Artist-in-Residence at the Critical Design Lab at Vanderbilt University.