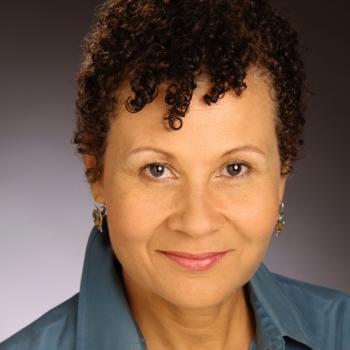 Judy Tate is a playwright, television writer, artistic director, producer and educator. Her television writing includes Another World, Days of Our Lives, and As the World Turns. She’s won four daytime Emmys and a Writers’ Guild of America award.

Judy is the founding artistic director of Manhattan Theatre Club’s “theatre company within a theatre company,” Stargate Theatre, a work and social readiness theatre program for justice-involved young men. Each summer they perform their work on Manhattan Theatre Club’s Stage II at City Center. Her 14 years of work with high school inmates on Rikers Island inspired her original TV pilot, Lockdown High. She is a 25-year member of Ensemble Studio Theatre and a member of their Playwright’s Unit, where she’s developed plays for production.

She is also, the Producing Artistic Director of The American Slavery Project (ASP), a theatrical response to revisionism in our national conversation around enslavement and its aftermath. ASP centers African-American writers who write about the era, creates conversation in the community, educates and produces original work, and makes vital connections between Black beginnings in America and today. ASP’s first original work was Unheard Voices, a monologue play with music and drumming that brings to life some of the African descended, colonial men, women, and children buried in the African Burial Ground in Lower Manhattan. ASP was one of the first companies to pivot during the 2020 pandemic to create audio dramas with soundscaping and minimal visual scores, offering them without fees to 17 partner theatres who were caught without content for their audiences. Black Women and the Ballot, about the tiny rebellions Black women have mounted to progress voting rights, has been viewed over 5K times.

A professional actor for many years, Judy has worked in theatres throughout the United States and in Southern Africa. As a teaching artist she’s worked with playwriting students in alternative schools, prisons, and shelters, and from reservations and townships both independently and with MTC, TDF, and the International Theatre Project. She is an alumna of NYU’s Tisch School of the Arts conservatory program where she studied at Stella Adler and was an honors graduate receiving the Founder's Day Award, Seidman Award, and Beinecke Award for excellence in acting and academia. She is an adjunct at NYU Steinhardt and Drew University.