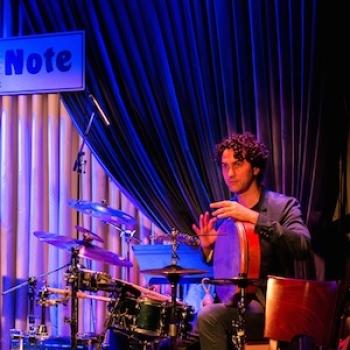 As a percussionist, drummer, and composer, John Hadfield’s dedication to music has taken him from his native Missouri to concert halls and clubs across the world. He has released two albums of his own compositions – The Eye of Gordon and Displaced – and composed for various ensembles and dance performers, as well as for the feature-length documentary After Spring, which was selected for the Tribeca film festival. In 2019 he composed and performed in Apologue 2047, a multimedia performance art piece directed by Zhang Yimou, which explored themes of the relationships of humans and technology.

John’s ability to cross genres has allowed him to appear with a broad range of artists such as Nguyen Le’s STREAMS Quartet, Kinan Azmeh’s City Band, the Saturday Night Live Band on NBC, the Jazz at Lincoln Center Orchestra and the Silk Road Ensemble. He has collaborated on more than 100 recordings as a guest artist, including Grammy Award-winner Yo-Yo Ma & Friends’ Songs of Joy & Peace and the Grammy-nominated Fun Home. Most recently he can be heard playing percussion on the movie soundtracks of Gemini Man and the 2020 Oscar-winning score Joker.

Hadfield has lived in New York City for the last 20 years and has been very active in the world of improvised music. He currently co-leads and composes for a duo project with Lenny Pickett, the group Believers with Brad Shepik and Sam Minaie, and Earspeak with Boris Skalsky. In addition to these projects he has performed and recorded with inspiring and creative musicians such as Ron Blake, Billy Drewes, Art Lande, Kenny Werner, Jean Michel Pilc, James Genus, François Rabbath, Greg Osby, Shai Maestro, Cuong Vu, Gilad Hekselman and Petros Klampanis.