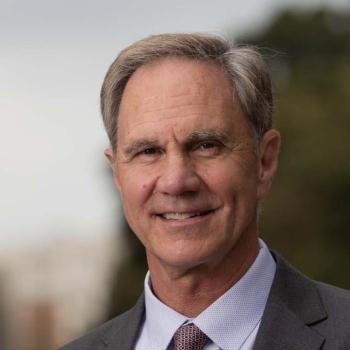 Jack H. Knott serves as the Dean of the Steinhardt School of Culture, Education, and Human Development at New York University and holds the Gale and Ira Drukier Dean’s Chair.

Before joining NYU, he served as the Dean of the Sol Price School of Public Policy at the University of Southern California, where he held the C. Erwin and Ione L. Piper Chair in Public Policy and Management. Prior to USC, Dean Knott served as Professor and Director of the Institute of Government and Public Affairs at the University of Illinois and of the Institute for Public Policy and Social Research at Michigan State University.  He founded the MSU Survey Research Center and helped establish the Michigan Political Leadership Program. Dean Knott was also a visiting faculty member at Warrick University in the United Kingdom and a Fellow at the International Institute of Management in Berlin, Germany.

Dean Knott has published three books, numerous peer-reviewed, journal articles, and several policy reports. His areas of expertise include political institutions and public policy, political economy, and public management. He has served as the principal investigator on numerous research grants and has consulted with foundations and nonprofit organizations on program evaluation and public policy, including the W.K. Kellogg Foundation and the California Endowment.  He currently serves on the editorial boards of two journals in comparative public management and policy.

Dean Knott received his Ph.D. from the University of California, Berkeley, his M.A. from the Paul H. Nitze School of Advanced International Studies at The Johns Hopkins University, and his undergraduate degree from Calvin University.