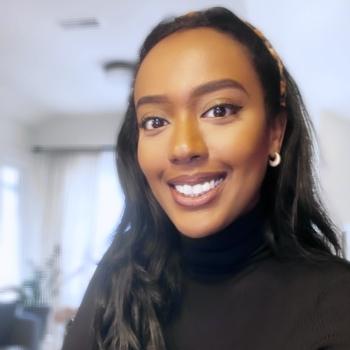 Huda Hassan is a writer and cultural critic from Toronto. Her work examines Black/African cultural expressions in diaspora, utilizing methods and tools from gender studies, literary and cultural studies, and media studies. Her research interests include Black cultural and feminist studies, African diasporas, countercultures, and the politics of difference. Her current research project includes a qualitative study into the history of Somalis in 19th and 20th century New York, and broader examinations of Black diasporic sensibilities shaping the 20th-century Harlem Renaissance.

Huda is a Black feminist cultural studies scholar. Drawing from black transnational feminisms and media studies, her dissertation, Ciyaal Baraf, was a black diaspora cultural studies project in two parts: an intervention into the conjunctures shaping the criminalization(s) of Black Muslims in settler-state media, and an analysis of the counternarratives and countercultures of Black Muslim artists through acts of artistic place-making and self-creation.

Huda’s writing has appeared in many publications, including Pitchfork, Hazlitt, BuzzFeed, and i-D magazine. She is an arts columnist for CBC (Canadian Broadcasting Corporation), where she dissects arts and literature from a Black feminist lens. Huda assists in the production, research, and writing for documentary TV and films, such as Black Life: A Canadian History (CBC, 2023). A former photographer, Huda has helped curate exhibits in Toronto, including ‘She Who Left, She Who Stayed’ (Creatures Creating, 2011) and ‘40 Years of Hip Hop’ (Gladstone Hotel, 2014). As a cultural worker, she has been part of the management teams of musical artists, including folk singer Mustafa the Poet and soca star Machel Montano. In 2017, FLARE Magazine named Huda as a writer to watch.

Huda obtained her Ph.D in Women and Gender Studies at the University of Toronto, where she was a 2020 New College Doctoral Fellow. Previous to her role at NYU, Huda taught courses on music and African diasporas, Black feminist literature, and feminist theories and methods.