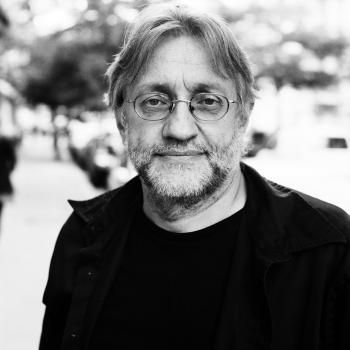 Hans Tammen is just another worker in rhythms, frequencies, and intensities. He likes to set sounds in motion and then sit back to watch the movements unfold. Using textures, timbre, and dynamics as primary elements, his music is continuously shifting, with different layers floating into the foreground while others disappear. Whether richly processed guitar sounds from his hybrid interactive guitar/software instrument Endangered Guitar, traditionally notated material for his Third Eye Chamber Orchestra, or graphically notated elements for the all-electronic Dark Circuits Orchestra, his music flows like clockwork, “transforming a sequence of instrumental gestures into a wide territory of semi-hostile discontinuity; percussive, droning, intricately colorful, or simply blowing your socks off” (Touching Extremes).

His works have been presented at festivals in the US, Canada, Mexico, Russia, Ukraine, India, South Africa, and the Middle East, and all over Europe. He has recorded on labels such as Clang, Innova, ESP-DISK, Nur/Nicht/Nur, Gold Bolus, Nachtstück, Creative Sources, Leo Records, Potlatch, and Outnow.

Hans Tammen is currently teaching at the School of Visual Arts and NYU Steinhardt. From 2001 to 2014, he worked at Harvestworks Digital Media Art Center in NYC, where he was responsible for the Client Services, Education, and Artist in Residence program, helping countless digital media artists through the completion of their works. As an arbitrator at BTQ in the 1990s, he has spent a decade advising unions about electronic monitoring and surveillance at the workplace, and negotiating contracts and agreements to minimize surveillance aspects. He received his undergraduate and graduate degrees from the University of Kassel, studying on a stipend from Friedrich Ebert Foundation.