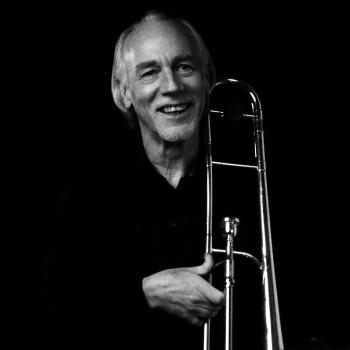 As a trombonist, composer-arranger, and bandleader, Ed Neumeister is a musician’s musician, as his peers are glad to tell you. Saxophone star Joe Lovano has valued Neumeister as a colleague for some four decades, praising him as a conductor of “infectious flair” as well as “a soloist of deep expressive passion.” Another renowned saxophonist, Dave Liebman, simply dubbed him “one of the best trombonists in the business.” And veteran pianist Jim McNeely has said about Neumeister, “Whenever I play a gig with Ed, I know the music will be interesting. By the end of the evening, I will have asked myself a couple of dozen times: ‘Why didn’t I think of that?’”

Neumeister has five decades of experience on both sides of the Atlantic as an artist and an educator. Born in 1952 and raised in the Bay Area, he was a professional musician by his mid-teens. In his San Francisco years, he backed such iconic vocal stars as Frank Sinatra and Sarah Vaughan, along with performing in various symphony orchestras. He also collaborated with Grateful Dead leader Jerry Garcia and such jazz notables as Jerry Granelli and Michael Formanek. Moving to New York City in 1980 and becoming immersed in the big-band scene, Neumeister was drafted by Mercer Ellington into the Duke Ellington Orchestra as both player and arranger for a 15-year tenure; at the same time, he was playing alongside the likes of Lovano and Tom Harrell in the Mel Lewis Jazz Orchestra (which would eventually become the award-winning Vanguard Jazz Orchestra). Neumeister’s arrangement for the Mel Lewis band of “A Nightingale Sang in Berkeley Square” was nominated for a Grammy Award in 1992.

In 2000, Neumeister moved to Austria for an extended period, serving as a professor for 17 years at the University of Music in Graz. He recorded multiple albums in Europe, leading large ensembles and small bands; he also wrote for various jazz ensembles, along with composing classical chamber pieces and large-scale concert works – including his Fantasy for Cello & Big Band, as well as an acclaimed arrangement of Bartók’s String Quartet No. 4 for a quartet of trombones. Following a stint in Los Angeles – where he contributed orchestrations to such films as Inception and The Dark Knight – Neumeister returned to the New York area in 2017. He has since been active as an educator, currently teaching at the School of Jazz and Contemporary Music at The New School, NYU Steinhardt, and City College of New York, as well as William Paterson University in New Jersey.

As a leader, Neumeister has recorded nine albums, ranging from large ensembles to small groups to solo trombones. He has released many of them via his own label, MeisteroMusic, including his latest, 3 for the Road, presenting his trio with vocalist Jay Clayton and the late pianist Fritz Pauer. The current version of that trio includes Gary Versace on piano. Another Neumeister gem is Suite Ellington, an album showcasing his arrangements for an all-star sextet of works by Duke Ellington and Billy Strayhorn; recorded in 2010 for Austrian Radio, Suite Ellington includes The Queen’s Suite, rarely heard in its entirety. Jazz Weekly praised the disc as “a great tribute and intro to the world of Ellingtonia.” Neumeister’s new working band is a New York quartet featuring the trombonist alongside Versace, bassist Drew Gress, and drummer Tom Rainey. Neumeister is also establishing a new jazz orchestra: the diverse, multi-generational Assemblage. As a trombone soloist, he is a member of the Joe Lovano Nonet. DownBeat has called Neumeister “a highly distinctive solo voice,” while JazzTimes has praised his “compelling” compositions.