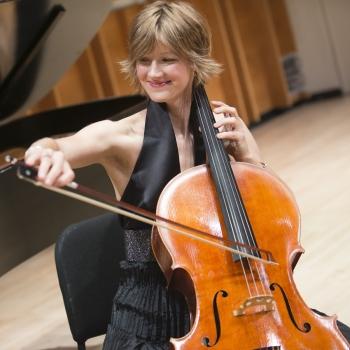 Canadian cellist Caroline Stinson performs widely as a soloist, recitalist, and chamber musician and has appeared at Carnegie's Zankel Hall, Boston's Gardner Museum, and Washington D.C.'s Smithsonian; the Koelner Philharmonie, Lucerne Festival, and Cité de la Musique in Europe; and the Centennial Centre in Canada. In recent seasons she appeared in recital in New York sponsored by the Finnish Consulate, in recital in Brussels, Belgium, with Accroche note in Strasbourg France, and as a soloist with the Stamford Symphony in Connecticut under Eckart Stier, where she also serves as Principal Cellist.

Ms. Stinson has commissioned and premiered works from solo cello to concerti, as well as chamber music with the Ciompi Quartet at Duke, the Lark Quartet, and Open End Ensemble, and has had the privilege of working closely with Pierre Boulez, John Corigliano, Peter Eötvös, John Harbison, Aaron Kernis, Paul Moravec, Shulamit Ran, Steven Stucky, Joan Tower, and Andrew Waggoner. In 2011 she performed Esa-Pekka Salonen's "YTA III" for solo cello at Scandinavia House in New York at the composer's recommendation, and in 2013 premiered John Harbison's Invention of a Theme of Shakespeare for solo cello and string quartet at the composer's festival in Token Creek, WI.

As a member of Lark, she will celebrate the group's 30 years from 2016-17 with commissions from Harbison, Waggoner, Bunch, Weesner, and Hatke.

As a recording artist, Caroline's CD Lines was released on Albany and she has contributed to more than a dozen chamber music recordings with reviews and features on this continent and abroad. Born in Edmonton, Ms. Stinson studied with Alan Harris (Cleveland), Maria Kliegel (Germany), Joel Krosnick (Juilliard), and Tanya Prochazka, with grants from the Alberta Heritage Scholarship Fund and the Canada Council. She has given masterclasses in Canada, the U.S., Mexico, and Europe has taught cello and chamber music at The Juilliard School, and was recently appointed Associate Professor of the Practice of Music in Cello at Duke University.

Together with her husband, Andrew Waggoner, Caroline is Co-Artistic Director of Weekend Chamber Music in the Delaware River Valley.