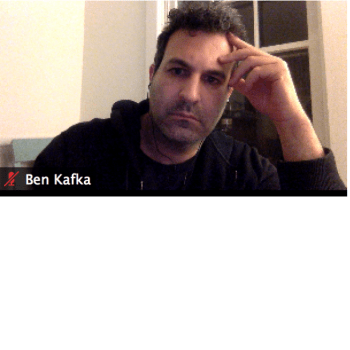 Ben Kafka is a psychoanalyst, cultural historian, and critic. He's interested in how desire, destructiveness, anxiety, confusion, magical thinking, and other forces manifest themselves in the lives of individuals, groups, and organizations. His first book, The Demon of Writing: Powers and Failures of Paperwork (Zone Books, 2012), was an investigation into our experience of paperwork's conflicts and contradictions. He's currently writing a book about gaslighting, folies-à-deux, double binds, Catch-22s, and other forms of induced insanity. A licensed clinician, he works with adult and adolescent patients in private practice.

Before coming to NYU in 2007, Prof. Kafka was a Cotsen-Perkins Postdoctoral Fellow in the Princeton Society of Fellows. He received his Ph.D. in History from Stanford. His clinical training has taken place at the Institute for Psychoanalytic Training and Research (IPTAR), a component society of the International Psychoanalytical Association, with additional training as a Rita Frankiel Memorial Fellow of the Melanie Klein Trust.

Prof. Kafka has been a member of the New York Institute for the Humanities since 2007, and chair of its executive committee since 2012. Over the years he has also been affiliated with IKKM Weimar; the Institute for Advanced Study in Princeton; the Chicago Center for Psychoanalysis; the Rutgers Center for Historical Analysis; and the Feminist Theory Archive at the Pembroke Center for Teaching and Research on Women at Brown. He is a co-editor of the journal History of the Present and a member of the advisory board of Grey Room.

He holds cross-appointments in the Departments of History and Comparative Literature.

Explores the subject of desire in modern media and culture. Freud's ideas have had a profound influence on everything from the earliest manuals on public relations to the struggles of modern feminism. We will read a range of psychoanalytic theorists while studying how their insights have been put to work by both the culture industry and its critics.

The Psychic Life of Media

This seminar develops themes addressed in “MCC-UE 1009 Psychoanalysis: Desire and Culture.” The course expands and deepen understanding of core Freudian and post-Freudian concepts via texts by Melanie Klein, W.R. Bion, Jacques Lacan, Jean Laplanche, and others. These texts will be considered alongside a series of media-cultural artifacts selected for study by seminar participants.