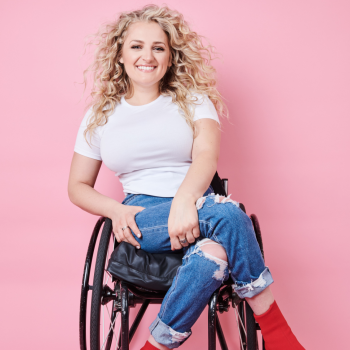 Ali Stroker won the 2019 Tony Award for Best Featured Actress in a Musical for her role as ‘Ado Annie’ in Rodgers and Hammerstein's Oklahoma! She made history as the first actor in a wheelchair to appear on Broadway in Deaf West’s acclaimed 2015 revival of Spring Awakening.

Stroker starred in 12 episodes of the talent competition, The Glee Project, winning a guest role on Fox’s Glee. She recurred in the Kyra Sedgwick ABC series Ten Days in the Valley and guest starred on Freeform's The Bold Type, Fox’s Lethal Weapon, CBS’s Instinct, The CW's Charmed, and Comedy Central's Drunk History.

She’s performed her cabaret act at Green Room 42 and soloed at the Kennedy Center in Washington, DC, New York’s Town Hall, Lincoln Center for the Performing Arts, and Carnegie Hall. Stroker is an honorary board member of The National Disability Theatre.

Her mission to improve the lives of others through the arts, disabled or not, is captured in her motto: “Turning Your Limitations Into Your Opportunities.”