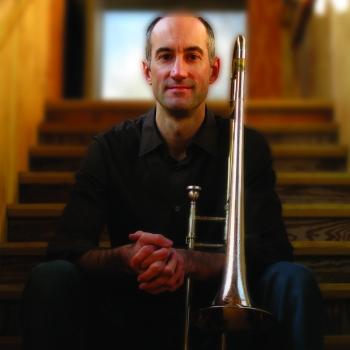 Grammy-nominated trombonist-composer Alan Ferber has been called “one of the jazz world’s premier composers and arrangers for larger groups” by All About Jazz NY. Jazz Times magazine describes Ferber’s compositions as “inspired and meticulous” and the L.A. Weekly deems him “one of the premier modern jazz arrangers of our time.” For the last six years, he has been recognized as one of the leading trombonists of his generation in Down Beat magazine’s International Critics’ Poll and Readers’ Poll. Ferber was the recipient of a 2013 New Jazz Works grant from Chamber Music America, funded by the Doris Duke Foundation. Since 2011, he has been an Adjunct Professor of jazz studies at New York University’s Steinhardt School.

Ferber's aesthetic approach prescribes a deep knowledge of the jazz tradition as a means toward meaningful innovation. Appropriately, the Wall Street Journal describes his music as “somehow both old school and cutting edge.” He has released six albums as a bandleader, and has recently recorded a new eight-movement piece for his working nonet called Roots & Transitions scheduled for release in 2016. In 2013, Alan Ferber released an album for 17-piece big band on the Sunnyside label, entitled March Sublime. It features stunningly original compositions and arrangements and was nominated for a 2014 Grammy award in the ‘Best Large Jazz Ensemble Album’ category. Prior to that, Ferber released “Music For Nonet & Strings” (Sunnyside) which received a coveted 4 star review in Down Beat and was named one the magazine’s Best CDs of the Year.

He has worked extensively in other genres as well with artists including Peter Gabriel, Paul Simon, Sufjan Stevens, The National, Dr. Dre, Harry Connick Jr, Michael Buble, and Beirut. His discography lists over 150 CDs on which he has played trombone and/or composed music.

Ferber’s accomplishments extend well beyond his recordings. His recent composer-arranger commissions include Kopi Luwak (2013) and Luteous Pangolin (Ben Monder) written for the Atlantic Brass Quintet (and released on their 2014 album Crossover on Summit Records); Lost In The Hours for the saxophonist Paul McCandless for a performance with the NYU Jazz Orchestra at the Blue Note Jazz Club in New York; I Sing For You (N King) and I Get Along Without You Very Well (H Carmichael) for Sara and Rachel Caswell with the JazzMn Orchestra; Hyperballad (Bjork) for the classical music outfit