Be More Chill, the story of an unpopular kid in suburban New Jersey, began its life as a young adult novel. It has now made its way to Broadway, and alum Joe Iconis has been nominated for a 2019 Tony Award for Best Original Score.

Iconis, 37, is an alum of our program in Music Composition. (His brother Philip is also a Steinhardt alum.) Since graduating, Iconis has had an exciting career. He wrote music for the television series Smash, and he has won several impressive awards including the Ed Kleban Award, the Jonathan Larson Award, the ASCAP Harold Adamson Lyric Award, the MAC John Wallowitch Songwriting Award, and a Doris Duke Grant. He also wrote the music and lyrics for Be More Chill.

The musical was first staged in 2015 at Two River Theater in New Jersey, which commissioned the show. It’s the story of uncool teenager Jeremy Heere, who is given the opportunity to become popular via a squip, a mini-computer housed in a pill that once swallowed, will guide him to coolness.

Over the course of the past three years, the show developed a dedicated following through videos posted online and a cast recording which has been streamed more than 220 million times.

“I think everyone relates to feeling ‘other,’ Iconis says in our interview when asked about the show’s enthusiastic fans.

Last summer, its Off-Broadway run at the Pershing Square Signature Center sold out before it even opened thanks to the hype surrounding it.

The hit musical just opened at the 900-seat Lyceum Theatre. According to the New York Times, the Schubert Organization offered the Lyceum after its president saw the show Off-Broadway and was struck by how young its fans are. The story is concurrently being adapted for film, which Iconis is also helping with.

Iconis is continuing to write and perform his own personal blend of show tunes, cabaret, and rock and roll in his traveling revue, Joe Iconis & Family. He is also reportedly penning a new musical called Punk Rock Girl. In addition, he runs his social media pages and even does his own graphic design.

In our interview, Iconis discusses how NYU helped him get where he is, what life is like as a composer, and, of course, Be More Chill.

“See as much art as you can,” Iconis advises. “Be kind and generous and collaborative.”

How did your educational experience at NYU shape what you do now?

At NYU I learned the basics of songwriting from Steve Rosenhaus, my private composition teacher. He literally taught me everything I needed to know to embark on a journey through the treacherous waters of the American musical theatre. He armed me with the tools necessary to craft songs that have integrity and structure. The NYU Graduate Musical Theare Writing program taught me how to collaborate, how to not be precious about my work, how to receive criticism, and it allowed me to find my voice.

Do you have a favorite memory from your time at NYU?

Playing piano for the New Student Cabaret my freshman year at Steinhardt, directed by John Simpkins (who would become a life-long collaborator) felt like a defining moment in my life. I had never been around such a collection of talented people. It made me feel both invigorated and terrified.

What are some highlights you've worked on since graduating from NYU?

Besides Be More Chill, I’ve worked on Broadway Bounty Hunter, Bloodsong of Love, The Black Suits, ReWrite, Theaterworks USA’s The Plant That Ate Dirty Socks and We The People, and the currently in-development Hunter S. Thompson Musical and Love In Hate Nation.

What is a typical day like for you working as a writer?

Total, complete, utter madness. I've always been a person who has juggled a million projects at the same time, so I'm constantly multi-tasking. Some days I spend most of the day writing, usually on a variety of scripts at once. Some days I do nothing but work on the business side: sending emails, making phone calls, running my social media, designing graphics (I do my own graphic design!) and generally trying to keep my head above water. Since the beginning, it's sort of felt like I've been running a corporation, which is my own fault. I come from a long line of hard-working people. My grandparents worked until they died. My parents still work. The Iconis clan has that roll up your sleeves and get your hands dirty mentality. I've always been ambitious and always felt like the one thing I could control in this unpredictable and often unfair business is how word I'm working toward achieving my goals.

Do you have any advice for students or alumni pursuing a similar career?

See as much art as you can. Be kind and generous and collaborative. If you can, volunteer your time so that you get in the room with artists you respect or admire. If you can't work for free, go toward the projects that you think will be good for you artistic soul and/or brain, not the ones that pay more. In general, don't be an asshole. Being an asshole will absolutely get you far in this business, but I truly believe that not being an asshole will get you farther in the long run. 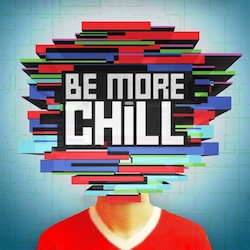 Can you talk a little bit about Be More Chill and how it came about?

My agent at the time passed the book on to me because he thought I'd respond to    it! I immediately fell in love with the complexity of the characters. When the book      begins, you think you know these people - they seem like stock types. The Nerd,        The Jock, The Mean Girl. They soon reveal themselves to be far messier and                surprising. Ned turned archetypical stock characters on their head. I salivated over    the thought of musicalizing the inner lives of these fascinating weirdos. And I was      so taken with the sci-fi element of the story. That's something that my collaborator    and I knew we wanted to play into from day one.

What do you think it is about the musical that has hooked so many fans?

I think everyone relates to feeling "other." Everyone has felt like a misfit at one time or another, even the people who won't admit to it. People know what it feels like to be in a bathroom hiding from a social situation on the other side of the door. That's not necessarily a "cool" or "sexy" thing, but that's our show and I'm so grateful that so many people love it so very much.

I read that Be More Chill is already being adapted as a movie, are you involved with that too?

Oh yes! So much of Be More Chill was inspired by film (1950s monster movies and the teen comedies and horror flicks of the 80s and 90s) that it feels only right for the musical to find it's way to celluloid. I always call the score of Be More Chill John Hughes by way of John Carpenter.

Do you feel the public's excitement for the Broadway opening? What's it like working on a show with such a dedicated fan base?

Thrilling because I feel so supported and terrifying because I don't want to disappoint anyone who loves the show. But that mix of joy and fear is pretty much what a life in the musical theatre feels like all the time, so it's all good.

What message are you and the Be More Chill team hoping to impart to your fans?

We've all got voices in our heads. The trick is knowing which ones to listen to.

Are you working on any other projects at the moment?